Richard Warman is still having to tell people it's lies: 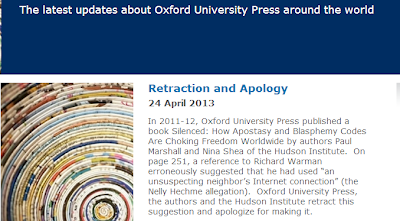 The "Hechme allegation" was one of the stranger incidents in The Speechy Wars--the epic political battle over section 13 of the Canadian Human Rights Act  that began in 2008 and still grinds on in the Senate.  Two  Neo-Nazis managed to convince a good portion of the Canadian media establishment that government employees hijacked the wifi network of one Nelly Hechme in order to spy on said Neo-Nazis.  it was a lunatic assertion, for many reasons, and the various investigations that followed cleared everyone involved.  More than once, in fact.

But here's the interesting thing. At the time Macleans Magazine was one of the prime media suckers.  They let Mark Steyn defame one of the government employees in question on their website; they let Steyn accuse this man by name (not Richard, incidentally) of criminal acts that he did not commit.  The story still appears on the Macleans website!   Now, the fellow didn't sue them because, I am told, he doesn't do that kind of thing.  But Macleans has been asked many times by bloggers like myself and, I think, Dr. Dawg, to pull down the defamatory piece, for decency's sake.  Clearly that kind of plea cuts no ice with the crew over there.

Posted by bigcitylib at 8:29 AM