Tom Adams, Jack Mintz, and Me On The Price Of Wind In Ontario

Tom Adams gets a lot of play as an expert on Ontario's energy system.  The fact that he is or was once associated with Lawrence Solomon's  group Energy Probe does not seem to put as many people off as I think it should.  For example, the well-known economist Dr. Jack Mintz has a number of ideas that he thinks would put Ontario back on track fiscally.  Cancelling the Feed In Tariffs (FIT) for wind and solar is one of them.  When I asked him why he favored this particular policy, he deferred to Tom Adams:


@Bigcitylib2 according to Tom Adams who is on top of these things, subsidies have created high energy prices. #onpoli @tomadamsenergy
— Dr. Jack Mintz (@jackmintz) April 8, 2014

Now, I've been engaged in an extended argument with Tom about whether subsidies to wind/solar projects in Ontario have indeed "created high energy prices".  I've argued previously that his own statements cast doubt on this contention and, earlier in the week, perhaps in response to my persistent nagging, he restated his position:

....While it is true that direct wind and solar costs are today small relative to the amount of the total bill, the energy contribution of wind and solar together is much smaller still. In addition, wind and solar will rapidly grow in the near term, thereby directly driving rates....

Based on data from the IESO on energy production in 2013 and from the OPA on costs contained here (at slide 48), in 2013 wind and solar generation provided 4.15% of Ontario’s total power generation but accounted for 10.65% of total generation cost (not including non-energy charges such as distribution and transmission) or about 6.7% of the total bill. The implications for consumers of this unfavourable ratio are exacerbated by the problem that almost none of the output from wind and solar is delivered during periods of peak usage. In the years 2014 and 2015, the OPA forecasts that wind and solar costs will increase by 130% to constitute 14% of the bill. No other bill component is rising so fast.

OK.  So, without being too smirky about it, I was right.  The costs today are "small relative to the amount of the total bill".  Whatever you may want to say about the future (and I will get to that momentarily) subsidies to wind have not "created high energy prices" in Ontario.  So when Tom says otherwise, he is conflating the present costs of renewables with what he thinks future costs will be.  And, as for Jack Mintz, we can argue about the pros and cons of the FIT program for wind and solar all we want,  but we should be able to agree at this point that the amount of money saved by its elimination today would be tiny in the grand scheme.  So if Mr. Mintz is really concerned about policies which might get Ontario moving again, I would submit that he's fixated on the wrong target.

Now, lets talk about the future.  Its true that costs for wind and solar will more than double over the next couple of years (divide the generation cost for them on slide 48 of this into the total costs line on slide 47 and you get roughly a 130% increase by 2015, as Tom claims). 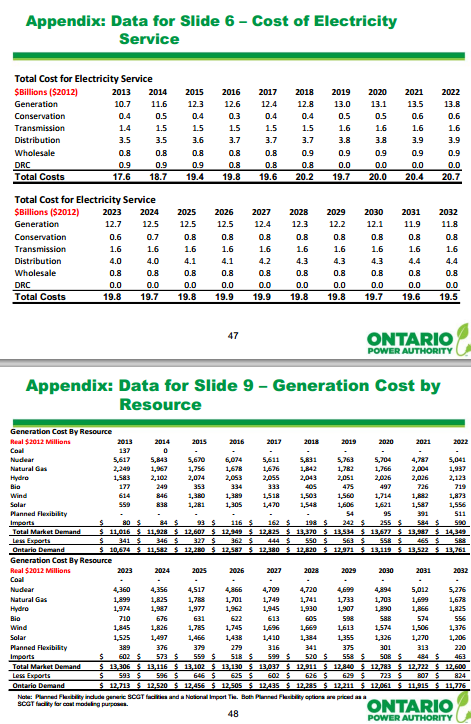 But how scandalous is this fact?  According to this chart, from slide 43 here, installed capacity for both energy sources will more than double during the same time period. 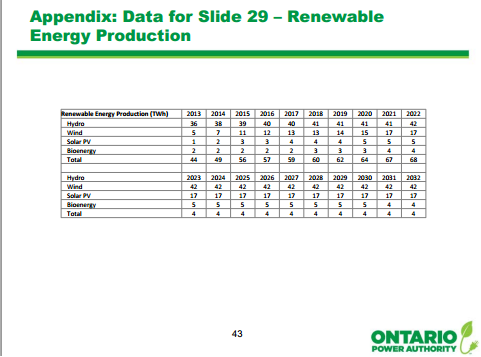 So that they should become a correspondingly larger proportion of the energy bill seems inevitable.
Once again, I'm not seeing a fiscal disaster of unmitigated proportions brought about by renewables's assuming a greater share of the province's energy mix.  If you buy twice as much as something, the bill should probably be about twice as much.

Indeed, catch Tom on the right day and he will admit this:

So where does that leave us?  Unless Tom wants to argue that the capacity to be made up by renewables over the next couple of years can go unfilled, abandoning them doesn't mean saving that portion of money going to pay for wind and solar, just whatever might be left over when you've filled the space left open by cancelling wind/solar projects with some other energy source with its own set of positive and negative qualities.  Plus whatever legal bills you incur.  Maybe a case can be made for doing that, and maybe not, but it certainly hasn't been made yet.  And, if I am reading slide 10 from here correctly... 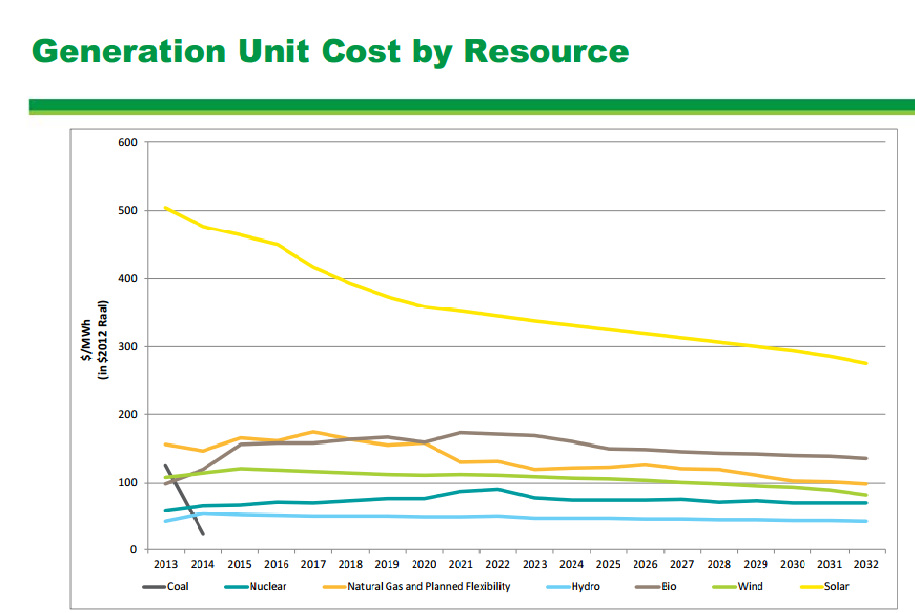 ...which is accompanied by this table: 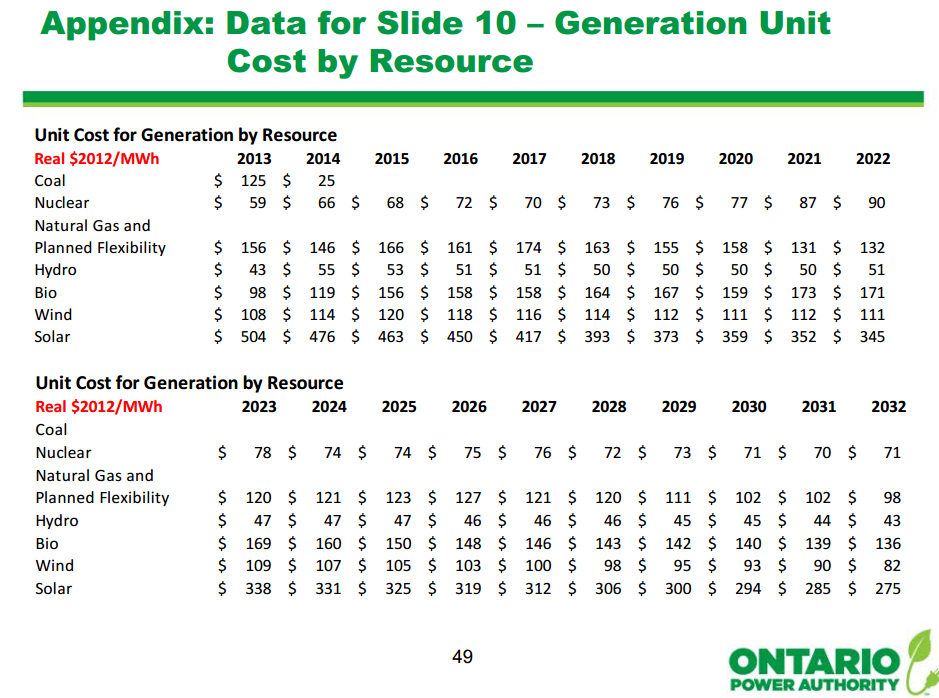 ...it looks like over the next couple of years cost per unit of power generated for wind is going up a wee bit, cost for solar is going down a bit more quickly, after which time they both start going down at various speeds.

Nothing here suggests that out-of-control hydro bill increases will be driven by either component.