Want Worms With That? 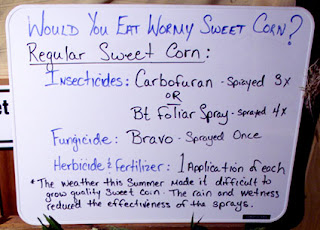 A 2003 paper in the British Food Journal by Powell et al described an experiment that found that, given a choice between genetically modified sweet corn and the regular kind, consumers preferred to buy the GM corn by a factor of 3 to 2. However, Stuart Laidlaw reported that the experiment was flawed -- there was a sign above the regular sweet corn saying "Would you eat wormy sweet corn?", while the corresponding sign over the GM corn said "Here's What Went into Producing Quality Sweet Corn".

unless someone had a vested interest in GM corn, I can't see what the point of changing the sign would be. Also, you'd think a study going into a peer reviewed journal would be more controlled than to have a white erase board as the description. Usually you'd have to submit the "questionnaire" into an ethics board or soemthing, wouldn't you? This is bad research at its worst.....hardly conspiracy theory ding dong....just plain stupid.

Another nice crock of fear-mongering. Why is that the Left's only tool? Oh right, because facts don't support their positions.

ALL corn we eat has been genetically modified, you idiot. 'Organic' or not.