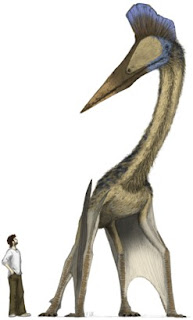 If there was a Nobel Prize for Cool, then paleontologist Darren Naish and Paleo-Artist Mark Witton would be awarded it 7-fold. I know Darren best, as a long-time contributor to the dinosaur mailing list, then an intrepid paelo-blogger with a taste for crypto-zoology (who wrote, for example, on "The Monster of Base Naden"), and now as the co-author of an astounding new paper on Azhdarchid Paleobiology.

Azhdarchid's were pterosaurs. In fact they include the largest pterosaurs--standing 2.5 meters tall and with a wing-span of 10 meters. (See picture above left, of Azhdarchid eyeing soft, pathetic human.) To date, however, reconstructing their lifestyle has been difficult:
While azhdarchids have been imagined as vulture-like scavengers, sediment probers, swimmers, waders, aerial predators, or stork-like generalists, most recent authors have regarded them as skim-feeders, trawling their lower jaws through water during flight and seizing aquatic prey from the water's surface.
However, Darren and Mark think that this last, most recent theory is incorrect:
We argue that azhdarchids were stork- or ground hornbill-like generalists, foraging in diverse environments for small animals and carrion.
What kind of "small animals", you ask? Well, as Mr. Witton's image below suggests... 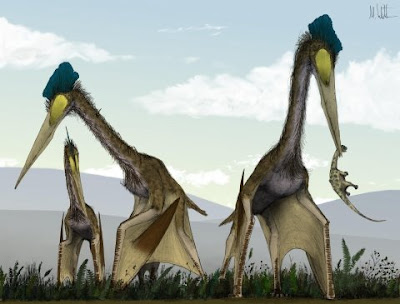 ...among their prey were hatchling sauropods! Now, for some scale here, the "babies" in the picture would probably be the size of a Great Dane, and our pterosaurs look to be sucking 'em back like oysters! Slurp! One gulp and gone, no need to even chew! (I think these particular pterosaurs were toothless anyway!)

And the best part? Although Azhdarchids made a living as ground hunters, Darren writes:

Even weighing 250 kg, azhdarchids were capable flyers as demonstrated by estimated wing musculature and planform. There is no reason to assume flightlessness.

Damn! Starts to make this guy sound prophetic! (If you know what I'm talking about, then you are truly a connoisseur of Canadian SciFi.)