Whoops! They Did It Again! 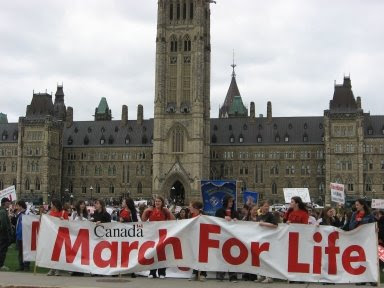 For the second year in a row, the Campaign Life Coalition has been busted for using the iconic Canada wordmark - the official symbol of the Government of Canada- on its anti-abortion banners.

And their story hasn't changed much either:

In an interview with Inside the Queensway, CLC national organizer Mary Ellen Douglas called the whole thing“ridiculous,” and insisted that she never even saw the sign — she was too busy with the “eight thousand people” on the Hill for the march. She repeatedly excoriated the media, in general, and ITQ, specifically, for ignoring the “real story”, and instead focusing on a “tiny little sign” (that, we should point out, was on a banner that required nearly a dozen ralliers to carry); she blamed the oversight on the “sign printers”, who, she said, were “asked to remove it,” but “accidentally left it on.” It won’t be there next year," she said.

The feds are weighing their legal options.

By the way, the official estimate of the crowd size at this year's event is a little less than that of Ms. Douglas: "approximately 7,000" according to the Ottawa Sun. While the numbers of participants in the Global Marijuana March, held the same week, sky-rocketed to 20,000.

Obviously, a few of the souls noted by Ms. Douglas wandered off to smoke a fatty.

h/t to Kadey O'Malley, who sees all, knows all, on Parliament Hill.

Very interesting, these people. They have used both the offical mark of the Gov of Can, and they have also used the pink ribbon (a trademarked and licensed symbol of breast cancer awareness) without permission to claim with no proof that abortions cause breast cancer.

I don't buy the claim that it was an "accident," either. Harper just can't look the other way on this one, otherwise anyone can use the symbol for their own purposes.

It's been pointed out elsewhwere that many schools sent classes of students to attend the event.

Omitting their numbers, I wonder how many adults attended. It'd be interesting to know that small number.

blastfurnace says that there is an assumption that abortions lead to breast cancer. I believe that meme started in the US and is used in the contraception/abstention education for their young people.

How can people get away with such lies and claim to be Christian?
It truly beggars belief.

*Shocking!* This is *shocking!*. Thanks for the scoop on this terrible legal transgression BCL.

I don't understand why you always compare this protest with the dopers' march.

Naturally a lot of dopers would show up for a march, just like lots of people show up for an NHL hockey game.

Comparing the trivial concerns of dopers with that surrounding the issue of abortion is not a relevant comparison.

=The feds are weighing their legal options.=

Somehow, I most seriously doubt there are any "feds" looking into this issue at all. However, if you are interested in persuing this issue further, Barbara Hall might be available.

"Who writes this stuff for you
BCL?"

You jealousy is sooo apparent.

See, I would write "your jealousy is so baroque."

The poor stoners. Some guy offers up a pizza and 25,000 of the fools show up. It's so sad about their plight. This is the 21st century after all and still, they are no closer to legalization then they were decades ago. Heck, even Britain is reclassifying cannabis as a Class C drug (more dangerous then Class B).

So you're OK with organised crime enriching itself (and keeping Maxime Bernier's girlfriends stylishly dressed) on the sale of a product that value of which is inflated through prohibition?

I thought we had learned that lesson in the middle of the last century, but I guess not.

Oh, the "organized crime" angle. What does that have to do with a bunch of pathetic stoners walking around?

What does that have to do with a bunch of pathetic stoners walking around?

Plenty. They are some of the most vocal opponents of the criminality at the heart of the economics of the drug trade. I only wish more of them would make an effort to make sure they don't contribute to it. But that's becoming increasingly impossible with prohibition.

I can't even believe you would dust off such a tired old cliche ti-guy.

That said, stoners are the problem, not me.

That said, stoners are the problem, not me.

I'm sure there's a distinction between the two here, but I'm not seeing it.