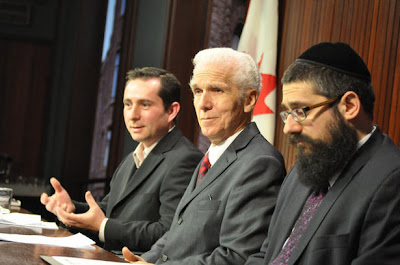 These three men are part of a multi-faith coalition that think McGuinty's anti-bullying bill is a "front" for a “radical sex education” agenda.

I don't know anything about Rabbi Mendel Kaplan; Jack Fonsesca (far left) is with the Campaign Life Coalition, so we can assume he's a few cans short of a six pack.  But the guy in the middle is Rondo Thomas (name inverted in the original story).  He's a pal of Charles McVety, and if you remember (I do!) he ran for the federal Tories back in 2006 against Mark Holland in Ajax-Pickering.  Got into a little trouble, he did, when a video of him exhorting his followers against same sex marriage came to light.  That video seems gone now--at least all the old links to it dead-end. but a few highlights of his remarks have been preserved for posterity (bolding is mine):

OTTAWA—A Conservative candidate who believes Adam and Eve set the standard for marriage in the Garden of Eden 6,000 years ago is being criticized for controversial remarks about gay unions.

So, not only anti-gay, but against facts as well.  Now, wisely, Tim Hudak stayed away from this presser, but Frank Klees hosted, and MPPs Lisa MacLeod and Peter Shurman apparently showed up.  So, in short, the Ontario Progressive Conservatives are still courting the nutbar vote.  Definitely not ready to rule.

Posted by bigcitylib at 6:17 AM

Hudak should have learned two important lessons by now:

(1) The more the federal Conservative party silenced its so-con crazies, the better it did, esp. in Ontario, and

(2) The more the Ontario Conservative party gave voice to its so-con crazies, the worse it did.

I know Hudak stayed away from this event, but he's apparently unable or unwilling to silence guys like Klees. Maybe, unlike Harper, he's just a very weak leader.

How is it that the Rabbi is a police chaplain given his, shall we say rather negative views on LGBTQ?

It seems that even within the Jewish community there were some questions asked about this clergyman's post as a police chaplain. I wonder if a police chaplain said the same things about Jews or Muslims if he would hold the job for very long.

Why do these groups call themselves multifaith coalitions when their respective communities do a collective face palm whenever they open their mouth?

Perhaps the JDL led coalition and the Mcvety led coalition should form a super multifaith coalition, which can be shortened to just The Super Friends. Thus, the news coming out of the super friends will be less often and the rest of us dont have to face palm every other day.

I applaud the Liberals for this legislation. I will watch as it gets debated to see who supports these bigots. I am also hoping that other human rights groups both federally and provincially come on board as well.

Almost totally off topic but "the facts don't count' comment reminds me of a similar statement by a Tory Federal Minister when talking about crime legistlation and denying that any facts that criminologists presented made no difference to the Gov't's decision to stiffen sentences.

I heard it on CBC about a year ago and have not been able to track it down. Does anybody remember it or can point to a source?

Still it is nice to see the Ont conservatives bringing out all the nut cases. With any luck it's a few more votes for the LPO or NDP.