After almost three months of dead air, a single  story in the Fort Mc newspaper of record (and a post from some crazy left-wing blogger) triggers a frenzy of activity on  the Ethical Oil Twitter feed: 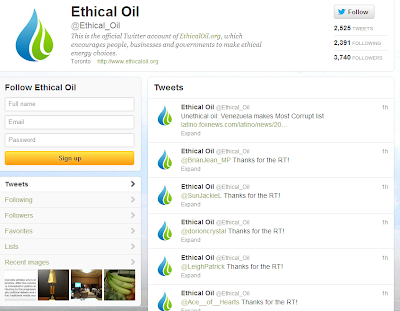 What you want to ask here is...who is driving the feed?  It does not seem to be their executive director Jamie Ellerton, because his recent (last 48 hours) activity is concerned more with very much other things, whereas previously he would tout EO 24/7 on his personal feed whenever they were pumping out content.  I've emailed JE asking if he's still involved in the project, but have thus far received no response.

So all of these tweets could be generated by a desperate Ezra from the home office of his rental.  He may be trying to convince potential donors that he's still worth giving their lobbying $s to.