Shale gas will power the future.  Or it won't.  There has been much back and forth over whether or fracked gas is the next big thing, or whether the nature of fracked wells is such that the recoverable volumes from them are being wildly  overestimated.  Basically, the individual wells don't produce for very long, and  "sweet spots" get pumped out first.  So you wind up having to drill like heck for lower quality returns, which of course drives up production costs.

Meanwhile, recent economic numbers from North Dakota, home of the famed Bakken Formation, suggest that the jobs boom created by exploration/exploitation of Bakken gas may be coming to an end: 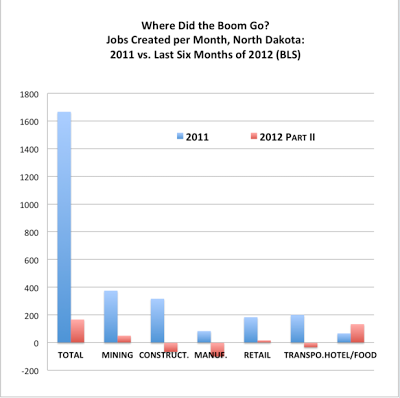 Let's begin at the left, with mining. The rig count across North Dakota, and particularly in the rich Bakken shale, dropped sharply in September and hiring has slowed since the summer, as drilling companies have turned their focus to efficiency as capital costs (and concerns of regulation) rise in the Bakken. That's probably had spill-over effects in transportation hiring...

Time will tell the story, but there are many who think that shale gas is already yesterday's news, and that what is happening in the Bakken  will repeat itself across the U.S. and globally.

Posted by bigcitylib at 6:56 AM

Excellent article .. the hits just keep on coming. Fabulously informative links as well. The last one leads to The Oil Drum.. and is one of the best factual perspectives I've read.

we need to see more condensed journalism & science like this.. that differentiates fracking relative to location, geography and economies.. and as required, political malfeasance and factual distortion.

Fracking in some ways reminds me of wild salmon fisheries versus open water fish farms. Nobody wants to burst the local very small employment and economic spinoffs bubble.. that reaches directly into coastal communities and families.

But .. the fact is.. infected farmed fish virus or sea lice are wiping out the wild salmon and fisheries with the full cooperation of Federal, Provincial and regulatory bodies. So how about those communities and families that rely on natural fishery or tourism? They don't count, versus foreign owned corporate fish farms?

Condensed version.. a small farm community, with shale underneath.. suddenly has water being piped from its water courses, hundreds of heavy trucks, drivers, crews spending money, for meals, entertainment, fuel.

A year later there are 1,000 fracking operations and wells at varying stages of completion. Pipeline and compressor stations being laid and constructed to move the product to larger pipelines.. and the secondary highways and roads will cost morel to repair then the profits and royalty fees from the petroleum firms.

Enjoy the movie.. its being created wherever a frack site gets started.