The CPoC is down a couple of points nationally, if you look at Decima's deets.  But what's most interesting is the B.C. breakdown: 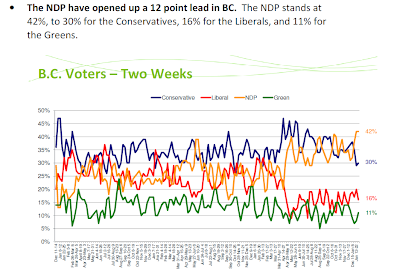 That's the Northern Gateway issue taken' effect, I think.  The NDP has been most aggressive about this on both the provincial and federal level, and the Greens get a minor bump.

C'mon LPoC; like Rafe Mair says, there is no middle way here; take a stand and avoid talking Centralist mush!

Posted by bigcitylib at 7:02 PM