Is this the beginning of a post Section 13 Neo Nazi Renaissance in Canada? Some have wondered as much. 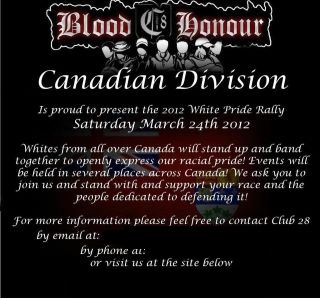 Or maybe not.  The folks at ARC doubt the organizers ability to organize a panic on a sinking submarine, let alone a rally across multiple provinces.  But they do note that several cities that might experience  trouble:

Calgary for obvious reasons
Edmonton due to the existence of a Blood & Honour chapter just itching to prove that they aren't all blithering idiots (already failed in that regard, folks)

London, Ontario since there appears to be a small movement tied to Blood & Honour located there (that, and "Max" who attended the rally in Calgary last year has returned to London).

There's no mention in the invite of Storseth's Bill C-304, but with its imminent passage the White Nationalist movement is looking at its greatest legislative  victory in Canada in decades.  Maybe they'll be up to a more vigorous celebration.

A few idiots in their parents' basements chanting "Sieg Heil" is supposed to justify having the speech of every Canadian under the review of government bureaucrats?

And blowing up stuff, setting fire to immigrants, and so forth.

If the racist rantings of a few unemployable losers just stays verbal, and does not degenerate into criminal activity, there is no problem. However these racist losers always end up assaulting or murdering innocent people or vandalising property. Giving these morons free speech is like giving a monkey a loaded gun with the safety off.

BCL: Where do they set fire to immigrants? I understand that happens in Europe from time to time. With their strict anti neo-fascist laws, you'd think that would undermine your argument.

And Jacob, we're not 'giving' these knobs free speech - we've just stopped the state from punishing any Canadian who chooses to use that speech in a way someone in power doesn't like. There's a whole host of other laws that should stop the from doing anything too stupid. Laws which I'm certain must cover burning immigrants.

Question: why would a bunch of bankrupt basement dwelling troglodytes be more afraid of a fine from the HRTs than the are of being thrown in a prison which is undoubtedly 70% native? Coincidentally a type of racism that I haven't seen much denounced round these parts.

mjshdiif said...
This comment has been removed by a blog administrator.
8:15 AM

Rabbit where do you get the idea that the "speech of every Canadian" is under government review? That is so much hyperbole. Show us exactly where and how this happens.

Thanks Chapel, my thoughts too.