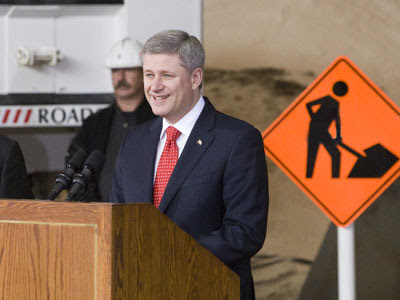 Posted by bigcitylib at 3:05 PM

That the guy standing behind Harper. Didn't he use to perform with the Village People?

Makes me think of the clowns who run behind the parade animals shovelling up the dung they leave on the street.

PM Steve has such a sincere smirk, doesn't he?

According to the United States' Homeland Security Advisory System, the orange on that sign means the bullshit being shoveled is between high and severe.

The sign behind Mr. Can't Smile Naturally, is shovelling up the excess rhetoric