What's Behind The Liberal Rebound? 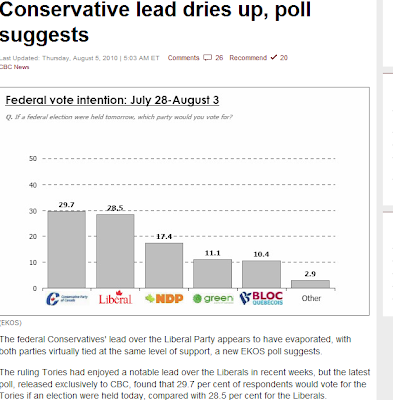 Is it the census debacle? Maybe a little, in that its provided the Tories nothing but a month of bad news. Is it Iggy's summer tour? Maybe a little, in that the tour has provided Iggy with probably the most positive media coverage he's had since he became leader, and its always nice to have a captive bus-load of reporters before which to denounce the government's stupidity of the day.

But I think this 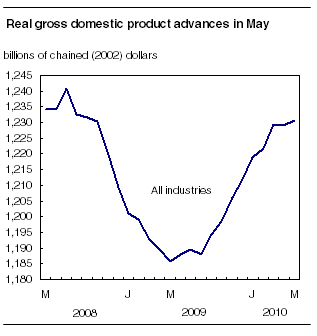 ...is the elephant in the room, especially the last couple of data points where the line stops pointing up. Economic growth has not only slowed since March, its done so quite a bit faster than the Bank of Canada predicted. Now, our job numbers have been pretty good, but these tend to lag other indicators. Probably a fair whack of them were added on the assumption that the U.S. economy would pick up and we'd need those bodies to build stuff to sell to them. That assumption has not panned out. So who knows how long before they start being reversed? Maybe as soon as the employment report tomorrow. If not, then eventually: a more or less flat economy does not generate full-time positions for very long.

Anyway, I suspect people have looked around and discovered that things haven't got much better in the past six months or so.

I think, if the poll's accurate, it's simply a reflection of the overall tone of media coverage. The census issue pissed alot of the well-educated Canadian media off. Since then Harper can't buy good cove-ahem, I'll take that back. But for the most part the nation's media has turned on him. I'm a firm believer that any one issue is far less important than the mood of the news media, and they haven't been cheery lately.

I think people will go so far and then say enough is enough.

The Liberals poll inversely proportional to Iggys being cited in Progressive Bloggers. The less he is mentioned the higher they poll! Pity they can't keep him on the bus until the next election.

Surely if this is a real and meaningful dip in the polls for the Cons it is a cumulative effect. I have never done a study but it seems that a government's popularity always begins to take a hit around the three to four year mark and then if they can will that coveted second term they rebound for a while and by the eight year mark they are toast. Of course, Harper doesn't have much to build on when we consider that he never was in majority territory to begin with. But it must be particularly painful to the Conservative caucus when we consider that the summer is usually the best time for an incumbent party. I think Harper was hoping to call another fall election to avoid the pressure that will obviously come in September over a raft of issues, now he must be rethinking that.

I now surely hope there is no election in the fall. The cons cannot shoot straight and waiting them out while they self destruct over the winter is a worthwhile exercise.

They cannot regain momentum unless something really major happens. Somerthing that will allow to regain some modicum of respect. I know a week is a long time in politics but I see the libs getting more and more focused. That is a good thing.

The pundit has some intersting stats on Tory fund raising going into the last weeks of June. Down 44%.

I agree that they've lost the media over the past few weeks/months. Worse, they've lost Maclean's. Why, even the National Post has opposed the census changes. In fact, nearly everyone has apart from the usual sock puppets at Sun Media. Meanwhile Stockwell Day is making an utter fool of himself - maybe he should just show up in another wetsuit and be done with it once and for all.

I think the census issue - which even to the most partisan Conservative is clearly ideologically driven has given the public once again a glimpse of the old "scary Harper" which he has kept under wraps for most of the last 4 years.

Josh said..."I agree that they've lost the media over the past few weeks/months. Worse, they've lost Maclean's. Why, even the National Post has opposed the census changes."

People seem to forget (well the Reformatards anyhow) that newspapers, TV & radio stations all use census data for their business plans. It's not just about looking over last week's ratings, they also try to plan for the future by studying demographic trends.

By playing to his base, Harper is cozying up to nut-bar libertarians who think the government is out to get them; against businesses who rely on census data for future business development plans.

Just look at some of the pinko-commie socialist organizations that are against the scrapping of the manditory long-form:

I could go on, but one more group that I should point out who are against the census changes...
Canadian Association of Journalists

With business and media against him, Harper has clearly stepped in it with this census move. I openly laugh at 'the great tactician'.

In the last six how many jobs have been added?

How many Liberal Premiers have raised provincial taxes?

The Liberals believe in voluntary polls by Frank Graves when the headlines are negative for the CPC?

That tour must be doing wonders!

Other than political junkies who is actually paying attention to Canadian political news?

Want to look at the ratings over at BBM?

Could someone please update CS software. She seems even more unable than usual to stay on topic.

Federal Conservatives are below 30% in the polls, now at a statistical tie with the Grits (before one word about Frank Graves the CPC had a 10% lead in his polls just last month - and this poll is in line with Harris-Decima from 28July)

Media and business leaders are against the StatsCan changes.

That is the topic of discussion. Comment on this or fuck off!

Gene, CS wouldn't know how to stay on topic if we tried for years on end. This is a Tory sock puppet with blinders on and a steady diet of reformatort BS injected into the veins