From Jen Gerson's rather gormless piece:

A London, Ont., university is defending its decision to restrict access to a course that teaches Muslims how to proselytize.

The Huron College course — The Muslim Voice: Islamic Preaching, Public Speaking and Worship — was, according to the syllabus, “open to Muslim men and women who offer religious leadership and/or speak publicly about Islam on behalf of their communities.”

The school allowed a non-Muslim to enrol in the course, but then kicked him out because, they said, they didn’t want to open the course to auditors. That student, Moray Watson, is an accountant who says he is an opponent of Islamic extremism and enrolled in the course partly to test the prerequisite in the syllabus.

So, who is Moray Watson?

Well, you can read him in comments all over the Internet, from Arnie Lemaire's site to Jihad Watch (none of which will get links here) to most of the other hard right culture warrior blogs.

Here's a sample from PJ Media: 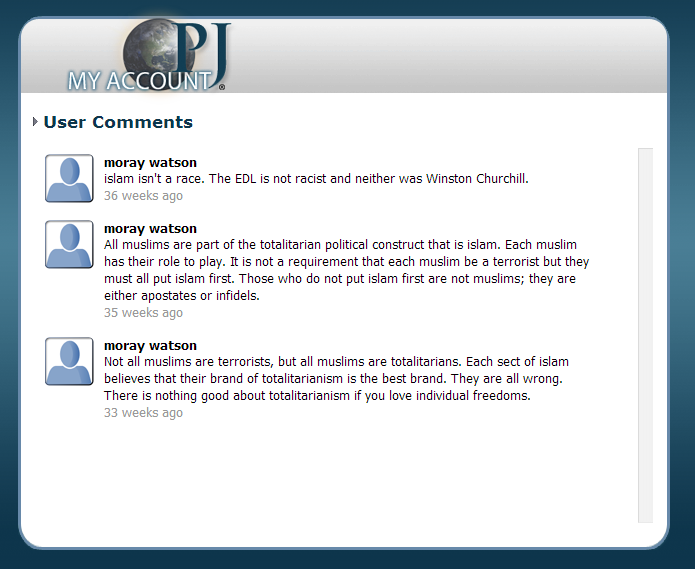 So, he's nuts, clearly.  And while he insists that he was kicked out for being non-Muslim, I suspect the university smelled Teh Crazy on him.  Certainly, this guy has no interest in preaching Islamic doctrine.  In fact the justification he gives for wanting to enroll in the course...that he wants to spy on the teacher to make sure she's not indoctrinating little jihadis is, well, I've already used the term nuts once, haven't I?

Posted by bigcitylib at 1:00 PM

But the fact that he's a wingnut makes the University's position look untenable. If he weren't a wingnut, he'd likely be allowed to audit the course. The post-facto restriction on conducting an official muslim-faith test for those who want to audit the course is transparently a sham, and a disgrace to the university. I agree with James Turk that faith tests should only be used narrowly in courses in divinity. That isn't the case here.

If this is justifiable, then the same argument could be used, for example, in banning environmentalists from auditing petroleum engineering courses, or banning anti-feminists from auditing women's study courses.

bigcitylib said...
This comment has been removed by the author.
1:38 PM

I'm not sure I follow you. The same argument could be used to ban a wing-nut from auditing a petroleum engineering course, but...

Dr. Mattson has been subjected to a campaign of harassment by Islamophobes since taking her position at Huron College. This is just the latest round in this larger campaign.

Thanks for the context, BCL

With BCL logic it would be OK to ban an environmentalist from a course promoting oil development. How illiberal can you get.

Rotterdam
Behave yourself.
Seminaries have always received government money and restricted intake to those of the faith in question.
Trinity Western receives public support and insists that students and faculty take a christian faith test and they aren't the only ones. How do I even get to take a course at TWU if I don't want to sign a statement of faith? Lie?

You may be misreading the article, BCL. The article is reporting that a distinction is being made by the university between auditing and taking the course for credit.

The Huron college professor claims they can kick any non-muslim out of this course if they are auditing it. If the non-muslim takes the course for credit they'd be a-ok with it.

So the University is saying that students that audit classes must be sufficiently faithful to certain tenets held by the teacher of the course, or they can be kicked out. Students that take the course for credit retain their right to intellectual freedom (although they might get an "F"). To illustrate that absurdity of that argument, I invented a few other hypothetical examples where such a policy might be applied in other fields of study. (Of course, you'd never see such situations come to pass: that is the point.)

So, I think this explanation by the University for its decision not to allow the student to audit the course is not likely true, since you'd never, ever see such a decision made in any other field of study (viz my examples). To me, it looks like a post-facto justification after the professor decided that having a wingnut in her class was likely going to make it difficult.

Harebell: the student taking this course wasn't using it to complete a degree in divinity (let alone that he was auditing it). That's the point Turk made in the article BCL linked to. One might argue that you can make a faith requirement for certain courses towards a divinity degree, but otherwise there shouldn't be such tests.

Unofortunately there is an extreme group of Islamophobes whe are determined to try to stir up hatred towards Muslims and are using the most vile and despicable innuendo and lies. Thank you BCL for monitoring and noting some of this.

Huron College is not a seminary. It is a public college. TWU is a private institution, that is why it is so expensive.
You would be able to audit a course at McMaster Divinity College (a Christian Evangelical School)if you were someone that is not of the Christian faith. In fact they would welcome it.

You would have a point if the gentleman in question tried to enrol in a private school such as http://thequranacademy.com/
. However that is not the case. My son had the right to enrol in a Ontario Catholic High School, even though we are not Catholic. Marxists and Socialists were free audit Economic classes taught by Prof. Ridpath at York University. So much for BCL liberalism.

Rotterdam, You are not obviously a kook, like this guy is. I would not like to have a guy in my class that was under the insane belief that the class needed to be spied upon by him. Who has left a trail of rampant kookery a mile wide on the Internet if anyone chooses to look.

With all due respect BCL, public academic institutions should not apply a political or religious litmus test for course entry. It is something I would expect from '50's McCarthyism. . This is not only illiberal but down right scary.

They have a right to keep out students who are there to do nothing but disrupt, and I suspect they figured that's what this guy was up to (and to maybe whip up a little controversy).

If Charles McVety taught a course at Seneca College on sexual ethics. You would no have any problem his right to block any student based on that students previous opinions.

Both the governmental and traditional accounting techniques use the double-entry program of accounting and publications and ledgers. The item of government accounting models is to provide support rather than create earnings. Accountant Rotterdam