A Feathery Reminder Of Global Warming 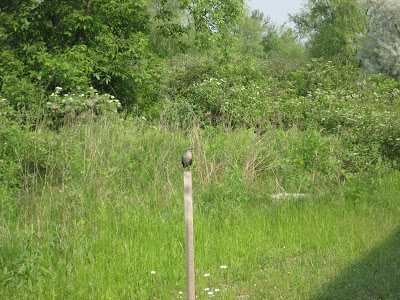 The only half-decent shot I managed of one half of a pair of Northern Mockingbirds (Mimus polyglottos) that summers in the Markham/Steeles area. (Click on the picture above and it doesn't look too bad) The range of these animals have been creeping North with our warming summers until, at the moment, there are 400 pairs living in the GTA (according to a representative of the Toronto Ornithological Club).

Here they look like a nondescript grayish thingy, but with wings spread (see below, picture from web) they become quite a bit more notable. According to some, by displaying the white stripes as they fly low over fields, they frighten insects into flight. 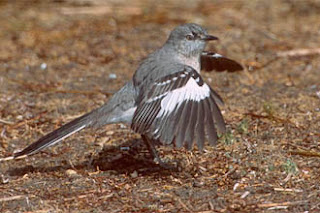 If you want to try attracting Mimus polyglottos to your feeder, try chopped apples or raisins, or plant multiflora rose (another invader). Although, if their GTA numbers continue to increase, they will probably come to be seen as an annoyance. They are very noisy and aggressive birds, especially when defending a nest (the one above buzzed my head not long after the shot was taken.)

Greek solar and hydrogen technology developer, Lion Energy,
www.lionhellas.com aims to close a funding round of EURO 70.0m (USD
89.5m) by the end of 2007.

KPMG www.kpmg.com has been appointed to arrange the placement, and the
company is also seeking additional investors, and we offering our shares
with the price 0.45 eurocent. Greek law firm, Kelemenis & Co
www.kelemenis.com is acting as legal advisors to the placement.

Lion Energy has an array of technologies which it intends to commercialise
as pilot plants. These include a solar electricity generating system using
low-cost polymer collectors and an electrolyte-based heat to electricity
generation system, a catalyst to facilitate hydrogen production from water,
a solar thermal desalination technology and the manufacture of a low-cost
construction material from waste plastic.

Lion energy will use the BOEING-SPECTROLAB-PYRON Solar Systems
www.pyronsolar.com generating systems to independently develop its own
utility scale solar farms to produce electricity for sale in Greece and
Middle East. The company will also have exclusive rights to distribution of
Pyron Solar generating systems for projects located in Greece

The Greek ambition is to have at least 700 MWp installed by 2020. With
currently a total installed power of 6 MWp, the market will have to grow by
more than 40% a year to achieve this goal. The new legislation, combined
with interesting investment incentives, provides financially attractive
opportunities for PV in Greece. The return of investment can even be better
than in Spain

Is this the warming trend since the last Ice Age?

Worse than mocking birds are the possums I've seen. They make racoons look like terrific neighbours.