The Fetid Beast And Other Cryptozoological Mysteries 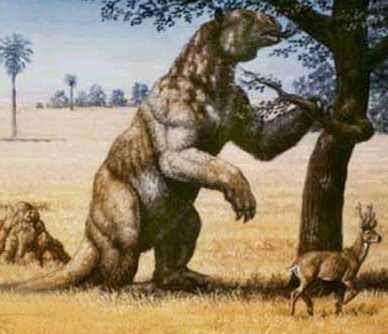 A nifty story in today' N.Y.Times about the search for the Mapinguary, a fabled and possibly non-existent Monster of the Amazon Jungle. The name, which when translated means "the fetid beast", refers to the "animal's strong, extremely disagreeable odor". Cryptozoological types would like to think the animal is a living representative of the Megatherium, a very, very large (elephant sized) type of sloth that died out thousands of years ago. More likely, however:
the legend of the mapinguary is based on human contact with the last of the ground sloths,” thousands of years ago, said David Oren, a former director of research at the Goeldi Institute in Belém, at the mouth of the Amazon River. “We know that extinct species can survive as legends for hundreds of years. But whether such an animal still exists or not is another question, one we can’t answer yet.”
Another possibility is that the legend is based on native misinterpretations of the fossilized remains of Megatherium. This would certainly not the first time such a thing has happened. For example, Adrienne Mayor has argued famously that the legend of The Griffin is based on the attempt by ancient Scythian nomads to make sense of the vast Protoceratops bone beds of the Gobi Desert.

More recently she has argued that West Coast native Indian legends of the Kiowa water monster are based on Thalattosuchia, an ancient, ten foot long marine crocodile whose fossilised remains have been found in the area.

Mayor's work is fascinating from a cryptozoological perspective. The world is rife with legends of "sea serpents', which are often used as evidence for the veracity of modern sightings. But in some cases these legends may be based on interaction with fossil skeletons rather than actual animals.

Oh man this is rare photo honestly I didn't believe yet.