More Fun With Tory And Hillier 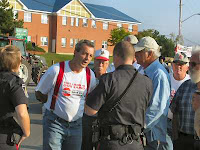 Randy Hillier, the Ontario Progressive Conservative Party nomination in Lanark—Frontenac—Lennox and Addington, has "a history of police confrontations". For example, in May of last year he disrupted a NavCanada conference where participants were discussing the new clean water Bill:

May 17, 2006 CORNWALL - Unrest among rural landowners boiled over Tuesday as protesters burst through a police barricade, forcing their way into the Nav Canada main lobby.

Leading the charge was Randy Hillier, president of the Ontario and Lanark landowners associations.

Hillier forced his way into the conference and demanded to speak. Conference host Jeff Ridal consented, and Hillier vowed "destruction" should the bill be passed. Merle Bowes, Vice President of the Lanarck Landowners Association (Hillier was President at the time) threatened to "detain government officials who tread their property while carrying out government regulations."

Despite their harsh rhetoric, Ontario PC Leader John Tory appears to have a soft spot for these rural revolutionaries. In early March of 2006, during a Queen's park protest, Randy Hillier "was escorted by the opposition into the Legislature" to present LLA demands. Maybe they wanted to help him pick out what seat he preferred when he became an MPP.
And, during a protest later that month, John Tory commented:

"American farmers, farmers in Quebec, get a big check at the beginning of the year," Tory said. "Our farmers, from the McGuinty Liberals, get a little bit here and there..."
Appeasement, anyone?
PS. What is it with these Rural Revolution types and their red suspenders? Symbolism, or something?

It really does look like Tory has a double-standard wrt protestors who break the law. I would be extremely surprised if any established party would welcome Shawn Brant as a candidate. He's a loose cannon who has little regard for the law if it stands in the way of puttin' his cause on the front pages and front burner. He's an asset to his cause but he'd be a liability to any party whose banner he carried. Likewise, Hillier.

Yeah, the red suspenders are freaking me out too. I'm sure they're not meant to mean anything (I hope) and I assume these guys are just ignorant as to the double entendre.

If Hillier shaves his head though, I'm running for the hills.

On second thought, I guess I'd be better off running AWAY from the hills.

Significance of the red suspenders?

Not sure, just taking a wild guess, but it might mean he has a nephew named Harold and an obsession with duct tape.

I think Ontario needs a five-year plan. March those hicks up to James Bay and get them to construct a hydro-electric dam.

Judging from my last foray into the unpopulated wilds of rural Ontario, I think we'd only manage to get a Barbie Dream Dam out of them, but at least they'd be managed...all 300 of them.