To Whom Did CTV Cave? 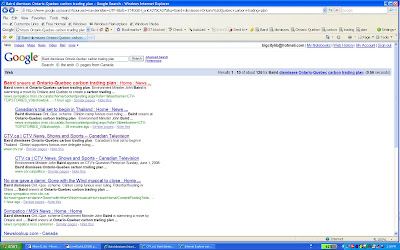 Nice that John Baird has taken up Jim Flaherty's role as Ontario-Basher in chief. Making statements like "only Alberta is forcing the big polluters to cut their emissions" will surely endear the Harper Tories to us Central Canadian folk.

So who strong-armed 'em? Or was it an honest reconsideration? I didn't see "Question Period", where Baird made his remarks. Was he sneering? He sneers alot. Can anyone tell me, did he give 'em one of these:

Or was he merely dismissive:

The stuff of conspiracy, this is.

Posted by bigcitylib at 5:06 AM

Too funny - the Blogging Tories are crying and whining saying Liberal bias on this one - can you believe it?

Love you post BCL. Just want to remind you that these are the Harris Tories and not the Harper Tories.

It takes a special kind of stupidity to find this is evidence of bias.

Yer in fine form with this kind of post, BCL.

Baird, however, doesn't sneer. He snarls...and it's not his fault. He just looks that way. His parents clearly understood that cosmetic surgery to make their gay son look like a formidable pitbull is the only option right-thinking "conservative" parents have. Had he not undegone the surgery, he'd look the way God intended him to look...something between Ezra "Joanne Worley" Levant and Peter "Baby Huey" Van Loon.

aside: Has anyone ever remarked that God gives "conservatives" the looks they deserve?? Even pretty Rona Ambrose's thick neck and ankles are asserting themselves, with age, in most unfortunate ways. And Helena Guergis would be nothing without the technological enhancements courtesy of Union Carbide.

Baird's getting back at his parents though...How else can you explain an obese pig who maintains he's a vegetarian?

ti-guy, I once knew a vegetarian who lived on potato chips and Ritz crackers... she wasn't thin.

In Baird's case I don't know that he truly claims to be vegetarian... he just wants us to believe that he doesn't eat anyone's meat