They have been dubbed a “terrorist threat” by the FBI and linked to numerous acts of violence across the United States, including murder. But now they have their sights set on Winnipeg — and a controversial case that has seen two young children taken away from their alleged neo-Nazi parents.

August Kreis III, the leader of the Aryan Nations, told the Free Press his organization is prepared to mobilize whatever resources are necessary to ensure the decision isn’t allowed to stand.

He said the case is unlike anything he’s ever heard of and he fears it will set a dangerous precedent across North America.

Meanwhile, Ezra asks "Do you like how Albertans are being described to newcomers -- as a bunch of stupid bigots?"

...which is an interesting question when you compare this graphic of StormFront's Canadian Membership 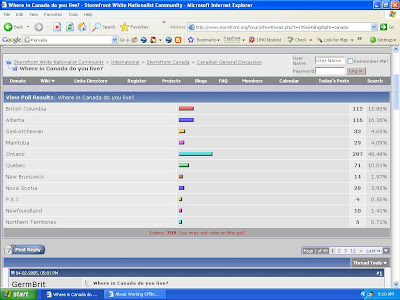 ...with this population breakdown by province from the 2006 census. Alta., with 10% of the population, has 16% of the Nazis! They've even been seen in the streets of Calgary! In fact all of the Western Provinces seem over-represented, given their population. Oh My!

Ezra's sure drumming up a lot of seething, over-the-top bigoted hatred in his comments section.

Kind of counter-productive, I'd say.

His comments on "office humour" also make me suspect he's never worked in one. Speech codes absolutely permeate most work environments. You can't just start telling fat/black/christian jokes. Although most people do have a sense of humor about such things, you always, always have to find out which gay guy takes it way too seriously and DON'T TALK LIKE THAT AROUND HIM.

A recent article speculated that the rather tiny number of "Nazi's" in Calgary will serve as a source of embarrassment for the cause rather than bolster the ranks. If anything, Canadians have become more polarized against Nazi's since the Second World War. Bigots now need subterfuge to peddle their wares.

Yeah, Raphael--they use subterfuge. These days they go around calling themselves Christians.

PS. Nice to see your move went well. Into the Redhair yet?

Oh no, not the Nazi threat in North America again. We are so afraid.

Ask business owners in Calgary what having a Nazi parade in front of your shop does for property values.

Ask business owners in Calgary what having a Nazi parade in front of your shop does for property values.

A few kooks protesting on a Sunday when almost all store are closed is somehow supposed to affect property values?

The police and curious onlookers always far outnumber the kooks at these gatherings.

Allow me to quote from 2007 Audit of Antisemitic Incidents" published by B'nai Brith:

"The majority of reported incidents of antisemitism in Canada occured in Ontario: 582 incidents or 55.9% of the year's total for all of the country."

In Alberta there were 28 reported incidents, less than 5% of Ontario's total. The number or Jews in Alberta is about 8% that of Ontario.

Perhaps more important is that there were 20 reported incidents of violent anti-semitism in Ontario, none in Alberta.

I trust you'll now write a post about racism and bigotry in Ontario.

I'm sure there are sources that better capture the totality of and the exact nature of incidents of hate than the B'nai Brith's report on anti-semitism.

I trust you'll now write a post about racism and bigotry in Ontario.

How is that going to irritate Albertans?

Storm Front membership is an even worse measure.

"Membership", so far as I can tell without joining up, just gives you the right to access the Storm Front site. Lots of people access this site, including people who monitor Storm Front.

Of the "real" members, I bet lots of them are socially inept, pizza-faced teenagers who join because it makes them feel "evil" - it's the most politically incorrect thing they can think of.

bet lots of them are socially inept, pizza-faced teenagers who...