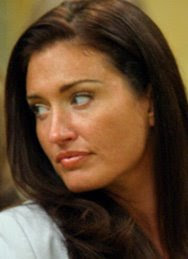 A former adviser in immigration made disconcerting revelations on the past of Julie Couillard, affirming that the former boyfriend of Maxime Bernier would have been tenancière of brothel.

Marie-Claude Montpetit explained in interview with the 98.5FM that Julie Couillard would have held two houses of vice in Montreal, one on the street St-Denis and the other on the street Bishop. The young girls who worked there were the immigrant ones coldly arrived.

Mrs. Montpetit also affirmed that Julie Couillard had been naked dancer in an establishment of the downtown area, and that it is not by chance that it met Maxime Bernier.

Here is the original French.

Frankly, I may have to revise my opinion of the Liberals as the sexxxiest political party.

Also, does this mean there's pictures out there... somewhere? Its going to be hard to do any work today. Finally, I am not impressed by the capabilities of Babelfish. For example, the correct spelling is "nekkid". As in: "She's Nekkid! Nekkid! Hee hee hee!"

Update: Welcome NN readers. Turns out the "immigration consultant" that made the above claims has credibility issues of his own.

Posted by bigcitylib at 5:53 AM

No one ever tells the truth in this demimonde. Which is why they appeal to Conservatives.

Maybe Couillard also has a Doctorat in Divinity from the California State Christian College, like Charles McVety.

Chocolate bar did not work. The wife doesn't blog, though. Maybe she's the problem.

Just to let you know her credibility issues is non-existant.

She was aquitted on all counts.

Her beauty is natural,I like the curve of her face, for all boys In choosing suit like stacy adams suits you need to be wise choose mensusa(d0t)com