DeSmog Blog has dropped the bomb: leaked documents from the Heartland Institute outlining their campaign against the science of AGW.  Goals include hiring a fellow named David Wojick to write up a K9 curriculum contra the evidence for AGW
Update: It should be noted that the Heartland Institute disputes the authenticity of the "strategic document" from which the quotes I used above have been taken. While the general content of the document--Wojick's writing up a set of course modules and etc.--has been confirmed, some of the more inflammatory wordings ("dissuading teachers" etc.) may be in question.  I have pulled the quotes until such time as their authenticity has been established.
Now, the heavy lifting has all been done by others in this case, but I thought I'd provide a little CanCon by noting that two of the "scientists" on the Heartland Institute payroll and Canadians Madhav Khandekar and Mitch Taylor: 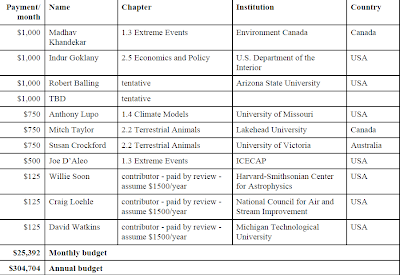 Khandekar used to advise the Alberta-based Friends of Science; Taylor has been telling everyone that Canada's polar bear population is doing fine under AGW.

On another note, Anthony Watts of WUWT fame has basically admitted to recieving over $80,000.

Nothing has been picked up so far by our lethargic Canadian media, but quite a few stories in the UK and U.S. press.

The first hit is from the Guardian Comments blog
But it seems to have been taken up by the real paper -- Susanne Goldenberg.
& it should get some New York Times coverage, given this comment from the leak --
// The strategy memo as published by DeSmogBlog mentions "cultivating" as a potential ally Andrew Revkin, a respected journalist who enjoys a huge following at the New York Times DothEarth blog. //
http://www.guardian.co.uk/environment/2012/feb/15/leak-exposes-heartland-institute-climate

Khandekar is still on the ICSC Science Advisory Board
http://climatescienceinternational.org/images/pdf/flier-icsc-28-10-11-web-linked.pdf

Khandekar was also an executive and "allied expert" for the now-defunct Natural Resouces Stewardship Project
http://www.sourcewatch.org/index.php?title=Natural_Resources_Stewardship_Project

Both the ICSC and the NRSP received funding from the Heartland Institute in 2007, $45,000 and $25,000 US respectively
http://hot-topic.co.nz/puppets-on-a-string-us-think-tank-funds-nz-sceptics/
...despite ICSC's insistence that it has never taken money from corporations or organizations:
http://climatescienceinternational.org/index.php?option=com_content&view=article&id=510

Curiously (or not), the list of names appearing as experts for one organisation is nearly interchangeable with the other.

US Warmongers do so much better running our global warming fear mongering scam . . . best thing to hit fund raising from the rubes since The Club of Rome.

Even a dummy like Al gore can get rich on this grift - amazing. And Jim Henson made over a $million alone traveling around the globe spreading the word of Gaia.

Long Live Global Warming! What's a few thousand dead Eurolanders frozen in their homes they can't afford to heat because of our glorious Carbon Tax rip-off.

John Mashey describes where his document has info on money to Canadian and NZ groups here:

Right, Fred. The Forbes 400 is full of folks who got rich with Greenpeace and the Sierra Club, not the multi-trillion dollar fossil fuel industry.

Wow, the things one learns on the intertoobz!

"And Jim Henson made over a $million alone traveling around the globe spreading the word of Gaia."

Only a $million? I guess Kermit was right: It's not easy being green.

The "2012 Climate Strategy" document, which Heartland says is a forgery, is the one that the shocking quotes come from. I noticed several suspicious things about it:

1. It refers to Heartland's own position as "anti-climate." But that's a derogatory term which climate skeptic outfits never use to describe their positions.

2. It's written in the first person, yet there's no indication of who wrote it. (Have you ever seen a memo like that?)

Michael Tobis answers your points here
(http://planet3.org/2012/02/14/is-turnabout-fair-play/), Dave, for the benefit of others reading. A fairly good discussion of the affair at that URL, actually. Although mostly consisting of contributions from "warmists".

That they would make such a claim? No.

To clear the air, they should just wiki-dump all their documents and let the people judge. ;)