Smithers has now voted to officially oppose the Enbridge Northern Gateway project, becoming the fourth local government in the northwest to take that position.

Councillor Phil Brienesse, whose motion last month to oppose the project was defeated, re-introduced it last night, noting two other communities and a regional district had taken a stand -- and it was time Smithers did too. And this time, Smithers did.

"I hope this really brings our community together and in particular what it does, is it brings the north together so now we have Smithers, Terrace, Prince Rupert, and the Skeena Queen Charlotte Regional District all opposing Enbridge, in their own unique ways that makes sense to their community," said Brienesse, adding "we have a united North, so I am very positive about this."

If you are wondering why these four towns, the map below gives you the Northern Gateway pipeline route. 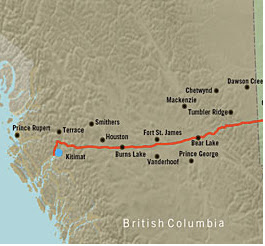 Skeena is that bit offshore South of Prince Rupert.