Simon Donner has  a couple of posts on Canadian Green House Gas emissions and the government's spin on them.  In the first, he notes that:

GHG emissions grew by only 2 Mt CO2e (that includes CO2 plus other GHGs converted to "units" of CO2) despite the fact that the economy was rebounding from the recession. This was viewed by some, including the Environment Minister, as good climate news, because it suggests that  the economy is decoupling from greenhouse gas emissions.

While casting a skeptical eye on the alleged decoupling--after all, our current federal government's economic strategy relies on Canadians returning to their roots as resource extractors (hewers of wood and bearers of bitumen)--he notes in the second post that, in any case, this apparent progress has been undermined by other circumstances:

He's got a nice chart showing these regions: 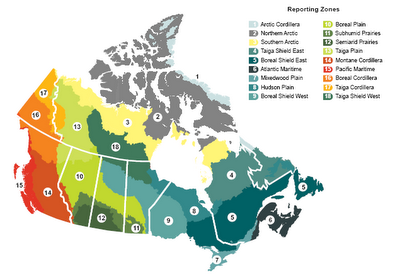 So what's up with the forests of western B.C., which have gone from a carbon sink to a carbon source?  The answer comes from the government's National Inventory Report itself:

The upward trend in dead organic matter (DOM) decay since the year 2000 reflects the long-term, growing effect of past disturbances, especially insect epidemics that have left substantial quantities of decaying DOM. Over the last decade, insect epidemics have affected a total of over 56 Mha3 of managed forests, with 72% being located in the Montane Cordillera reporting zone and corresponding to the epidemics of Mountain Pine Beetle. In contrast, much of the interannual variability of the GHG budget of managed forests hinges on the occurrence and severity of fires.

This result is something that has been predicted for awhile, and will presumably get worse now that the beetle has jumped the Rocky Mountains and been found able to tolerate Alberta's cold winters.  And, as an interesting side note, last year's Alberta wildfires, which shut down enough tar-sands production to lop a few tenths off our national GDP, can at least be partially attributed to beetle infested trees, which burn to a savage intensity

sharonapple88 said...
This comment has been removed by the author.
10:27 AM

Maybe there's hope we can rally behind the beetle situation. There can't be beetle denialists out there.

There is also, freighter after freighter, loaded with BC's raw logs. However, there is no reforestation being done. The s.o.b's, even want to log our rain forests.

With Harper's sellout of the tar oil to China. The Enbridge pipeline being done by China. The refinig of the tar oil, being done by the Chinese. And, God forbid, the massive dirty oil takers from China. BC will become a polluted wasteland. The seas around the Port of Kitimat, are one of the most treacherous in the world. Total lunacy.

Harper, the Campbell/Clark BC Liberals and the BC Conservatives, all want the Enbridge pipeline, to be forced through. They are all, one and the same party. Harper is a Reformer Neo-Nazi, of his Northern Foundation Party, from 1989. The skinheads organized Harper's party for him.

Campbell thieved and sold our BCR. He shipped BC mills to China, putting 131,000 BC mill people out of work. China owns BC mines...they are bringing their own people, to work those mines.

Campbell thieved and sold, our BC rivers. The fools put dams in them. There are literally thousands of fish carcasses, dead from the water outflow, from the rivers, because of the dams. The next river for destruction is the Kokish River. Steel Head, Salmon and Dolly Varden fish, will all be killed off by the dam too.

Then we have the stupidity of Harper and Campbell's, permitting filthy diseased fish farms, which are killing off our wild Salmon.

I can't wrap my mind around, Harper's utter stupidity and greed. Of course, he is a little spoiled boy, from an oil family. Harper only cares about Harper, and to hell with the people and the country. His disgusting greed comes first.