This is fairly big news.  Richard Tol, him of the freaky hair, and, to his credit, one of the first wave of economists to study the economics of climate change, has long argued that--until  global warming pushed the planet's average temperature above the two degree C threshold proscribed by the IPCC as an acceptable upside limit--AGW's economic effects would be, when you combined all the local pluses and minuses, beneficial to the planet as as whole.  After some fierce criticism from Bob Ward of the Grantham Research Institute on Climate Change and the Environment, Mr. Tol has admitted he was wrong: the economics of global warming start to suck before we reach the U.N.'s  two degree maximum:

And here's the (Figure 2) Tol speaks of: 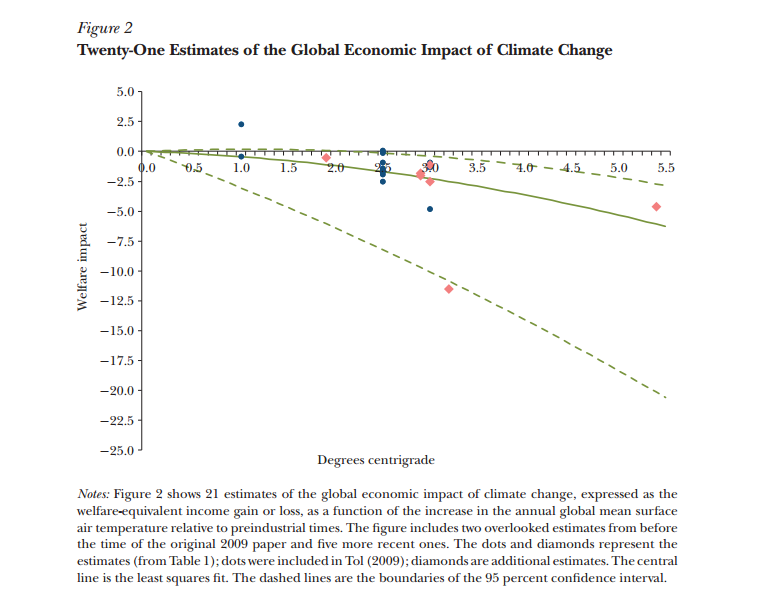 Note how, as Richard himself says, the global economy suffers under all estimates before we reach the IPCC's 2 degree limit, and in one case actually seems to take a shit and die

Good on Richard for issuing the correction.  That's how science is supposed to work.

Update: First "this" above now goes through to full text of Tol's correction.

A true researcher is always on a path of reviewing new research outcomes and making corrections.

Unfortunately, the text was cut short.

The full text states that the initial impacts of climate change are irrelevant for policy making, as they cannot be avoided. It therefore does not matter whether they are negative or positive, big or small -- the case for greenhouse gas emission reduction is the same.

The text then continues to state that the new impact estimates for profound climate change are far less pessimistic then they used to be.

I took the bit I like best. If the full .pdf was still available, I would encourage the reader to read it all. But it's gone.

They put the wrong authors in the header ...

I guess a corrected version will be up soon.

"The text then continues to state that the new impact estimates for profound climate change are far less pessimistic then they used to be.

That's more than a little ironic given that the physical science has tended in the other direction.

"The text then continues to state that the new impact estimates for profound climate change are far less pessimistic then they used to be."

Then the text is wrong.