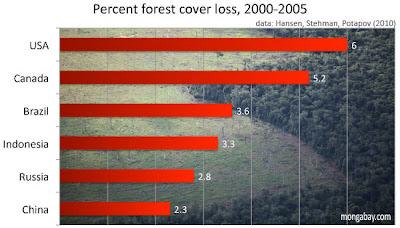 There is a little bit of stats parsing going on here: Looking at the seven nations which have more than one million square kilometers of forest still remaining--that's Brazil, Canada, China, Democratic Republic of Congo, Indonesia, Russia, and the United States--Brazil still led the pack in terms of area cleared, with about 33,000 square kilometers of both rainforest and tropical dry forest cleared per year, for a total of 165,000 square kilometers lost. That represents 3.6% of it's total forest cover at the start of the period examined.

However, though Canada and the United States lost less forest cover by area (160,000 and 120,000 square kilometers, respectively), in percentage terms Canada lost 5.2% of it's total and the US lost 6% of total forest cover.

Keep in mind, the global average for the time period was 3.5%.

Posted by bigcitylib at 6:53 AM

I wonder how much of that was due to the mountain pine beetle and the forest fires we've been experiencing lately.

Doesn't say for Canada, but for the states: "fire and beetle infestation in Alaska and the western states..." is a main contributor. Since BC and Alta and between those two locations, I suspect the same applies.

The Conference Board of Canada says that Canada had almost no change in total forested area from 2000 to 2005. See here:

So who's right? How do we reconcile these disparate statistics?

Rabbit, I can answer your dilemma. Get yourself a vehicle (a hybrid preferrably) and meander through the interior of my province, British Columbia.

You'll see we have two kinds of forests, the traditional green kind and the rust-coloured kind. At times it seems like you can drive forever through the rusty forests of recently killed pine, victims of the pine beetle scourge sweeping the west.

Between the green and the rust you may find the black forests, the charred remains of the increasing number of major forest fires we experience these days. Tinder dry forests catch fire really easily.

I used to live in B.C., and visit there often.

Although there are vast areas plagued by the beetle, it's not total devastation. Much of the B.C. interior is mixed forest, with pine, spruce, and fir intermingling.

Thus the infested areas have lots of reddish-brown ex-pines, but they are still forest.

Does BCL's data measure biomass instead of area?

The BC government records the loss of 16.3-million hectares of forest to the pine beetle but that is an out of date statistic.