Jasmine herself seems to be this one, but there are plenty of others. For a laugh, readers with art talents might want to "shop" their three favorite, or perhaps the three bustiest (although which three are bustiest in this context might be difficult to determine) into the photo of Rahim below: 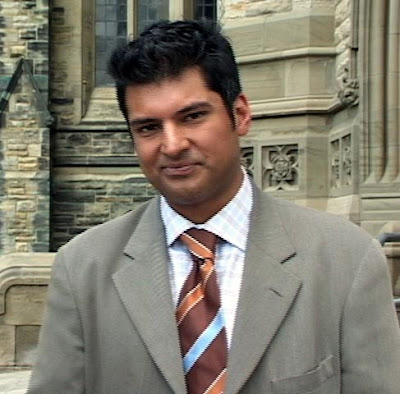 Amazing! Jasmine is just 18...and has experience! Must be a fast learner!

I know the talent pool is shallow, but Jaffer's been known to be a sleazebag since the Reform days. Whatever posessed Harper when he made him caucus chair and named a woman stupid enough to marry him to cabinet?

That's the one I meant. What's the regular URl for that?

Wow! Cons know how to have fun. Damn Libs are so boring.

Keep the youth employed - good money in being a call girl

Keep the youth employed - good money in being a call girl

No comment other than to offer up the WV -- 'Shagably'. Believe it or not.

Economic Action Plan, to stimulate, the economy that is.

The only thing that could make this story better would be claims that Jaffer likes to snort the coke off of Del Mastro's ass.

Gee, those escort agency ads certainly aren't as discreet as I remember them.

Feh. The reason I never went into the private sector is that everyone engaged in it always seems to be no more than two degrees removed from sleaze and organised crime.


As for snorting coke off Del Mastro's ass, gee thanks, now I won't eat for a week.

Ever wonder what a CPC caucus meeting is like?

As for snorting coke off Del Mastro's ass, gee thanks, now I won't eat for a week.

I imagine that's the usual experience for anyone's who's snorted coke off the Tibetan Plateau that constitutes Del Mastro's ginormous ass.

*sigh* And I used to be the good little boy who never made fun of the fat kids.

Thanks for coarsening me, Conservatives.

I don't make fun of Del Mastro, because he is fat.

I make fun of him because he is an asshole.

Sanctimonious, and self righteous, just like all good conservatives are.

"Sanctimonious, and self righteous, just like all good conservatives are."

Is this it, really?

Is this how low good Liberals have fallen in their effort to manufacture an "issue"?

The lame "abortion" effort is bad enough, now, we're attacking women because of who they married?

You know the drill.

I know the economy is very low on Michael Igantieff's list of priorities these days, but our economy happens to be kicking the G7's ass.

I'm shocked, SHOCKED, by Mr. Harvie's allegations. We really must remove these Martin and Gagliano characters from power!

You really don't believe that a disgraced crackhead selling access to the PMO is an issue Rob? Christ you're predictable.

Great, you know how to use a strawman argument.

You are full of shit, if you can't see anything wrong with the Guergis/Jaffer picture.

Are these the values of the CPC today?

I think Guergis has a picture of Harper and some sheep, because it is the only reason I can see that she is still in cabinet.

Calls into question the judgement, and competence of the whole damn bunch of them.

Former Liberal Prime Minister up to his neck in goodfellas?

Like about a million other Canadians by the way.

If there is evidence that an MP used her position improperly, get on with the production of evidence - otherwise, it's nothing but desperate innuendo.

Shit.. it's almost getting too easy to show the complete absense of any substance coming from the LPC.

I think that perhaps, in light of the Liberal predilection for grease, particularly following up still rather closely on the whole Adscam debacle - it would behoove the LPC to be more diplomatic in throwing around allegations of unethical behavior.

Cons, they only go for the "high class" hookers. LOL

R.G. Harvie, ah, that old stuff is just that, old stuff. The Libs called their own inquiry - Harper is afraid to.

So, we have biker, chicks, illegimate children (Toews) and hookers - my how family values have changed.

So where are the conservative ass or leg men?

I think that, instead of insulting Mr. Harvie, we should be admiring his stout defense of a hopeless case. Its the lawyer in him.

But he also possesses inside knowledge of the CPoC that we should attempt to exploit. So, R.G: how will the Harper gov. rid itself of its Guergis problem, and when?

Shorter Rob: How perfectly déclassé for the Liberals to behave just like we Conservatives did when we were in Opposition.

Why do you come here, Rob? To take a break from feuding with the people in the double-wide next door?

Hey Harvie, Doctor Who is looking for his Tardis. Apparently you've been visiting the Martin years with it. Couldnt you have found a more enjoyable era of Canadian history to visit?

Ahem... That's "The Doctor." Doctor Who is a programme, not a person.

Pssst, Rob! For that matter everyone else here. These are indeed characteristics of the populist, neo-liberal, socially-conservative gang who've co-opted the name 'Conservative Party of Canada'. I also ascribe these characteristics to most federal NDP supporters. Neither have ever held power previously (the CPofC likes to con the voters to think they are the old PC party; but really are Reformers/Social Credit/firebrand populists and this stint in Ottawa is new – and the NDP never will be elected to govern); thus seem to think they have ‘values’ the other guys do not, and regard themselves as a political party of principle.

Once elected, EVERY party jettisons principle to maintain power. The Harper-gang is a text-book example. When your best defence for some of your most blatantly un-principled moves is ”but the Liberals did it too” this becomes, quite frankly, an admission that principles are the first casualty of any party after forming government.

I’ll give the unabashed Grit supporters some credit, at least they don’t flaunt themselves as sanctimonious, self-righteous, SOB’s like the most overtly partisan Reformatory and NDP supporters do. All those years in power have taught them the cold realities about maintaining a government. It also explains Ekos’ numbers from the other day showing that if None of the Above were a ballot option, it would probably win a majority government. The average Canadian realizes how ‘principled’ all our established federal parties really are. I also consider the Green’s high polling numbers to be a symptom of this; as being the new kids on the political scene I suspect their recent converts tend to project their own political philosophy on the party itself.

By the way Rob, I don’t consider you to be one of the “sanctimonious, self-righteous, SOB’s” …so please don’t take offence. Neither should you consider that original “sanctimonious, and self righteous, just like all good conservatives are” comment as a personal attack which you must defend. You may be a principled and thoughtful conservative, but the party you’ve aligned yourself with is most certainly not.

I’ve been labelled as everything ranging from ‘lieberal’ to ‘conservatard’ depending on my comments, the blog, and the partisan hack who replies. I wear it as a badge of honour while trying to maintain traditional Disraeli/MacDonald Tory values. Then again with the PCs being dead, there is no greater party I feel obliged to defend - so I admit now being an independent that I have it easier than you.

Now back to the topic at hand, imagine for example if Jaffer was an ex-Liberal MP married to a sitting cabinet minister; and who was recently absolved of serious criminal charges (of which he was plainly guilty), and was now being accused of influence peddling. You can imagine what the CPofC in opposition would be saying about this. Though I myself doubt this is factual and tend to believe the government on this one (only because he and Ms. Guergis were not very popular within their own party to begin with), it’s the official opposition’s job to be questioning if any of these allegations were true. It would be irresponsible of them not to.

Also, as if it is not enough to recall the past 5 years of the Harper government’s parroting of all previous Liberal administration’s blatant disregard for principles in order to maintain power; these incidents with Jaffer, Guergis, Blackburn, Raitt, Bernier, et al really should drive home that CPofC has officially become everything they once campaigned against. You are just one big, juicy spending scandal away from serious electoral defeat.

And any Reformatory trolls here who call the LPC ‘lieberals’ or ‘corrupt’ and think you support a squeaky-clean party of open, transparent government – look in the mirror. You have become the ultimate in hypocrisy.

Dude, bad blogging etiquette. You really need to put a NSFW beside some of those links.

I was shocked and appalled at all 16 pictures.