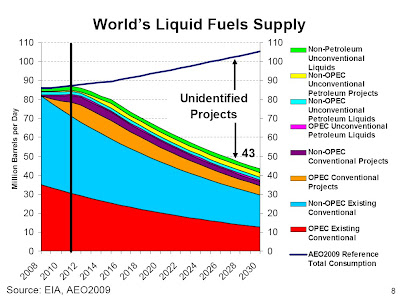 Obama’s decision probably doesn’t make sense unless you take the fear factor into account. Let’s face it, if you were President of the United States, and you looked at this graph, what would you do? I don’t know about you, but I would probably start by saying something like, “HOLY SHIT!” Politically, Obama is looking at rapidly rising petroleum prices right around the time of his reelection campaign, if not sooner. Economically, he’s looking at a potential crunch just when things are supposed to be getting better. And while opening these new regions to drilling isn’t going to solve the problem (because even if large amounts of oil are lurking there the supply won’t come on line for about a decade), at least he’s now given himself political cover.

Posted by bigcitylib at 9:31 AM

This means BC, Alberta and Saskatchewan are the economic gods of the future Canada.

He who pays the piper gets to call the tunes.

All three provinces are of course bastions of Liberal support.

Yes, drill baby, drill. Then the Americans won't need to buy any of that filthy oil from the West.

Y'all better figure out soon how to grow food again.

Ti-Guy - you are absolutely correct.

Oil indepedance is what they're trying to get rid of

There's a very real problem inherent in those graphs, which make "holy shit" an understatement. There is no way we can use other energy sources to make up that shortfall... the numbers just don't support it. There are a tremendous number of knock-on effect we can expect to see in the coming decades, like the death of suburbia, and a complete retooling of how we work and live... like Ti-Guy said, we're going to need to learn how to grow our own food soon.

The big question is how are people going to handle it when they suddenly can't work because the cost of the gas going to and from is greater than the income derived from being there? I have some hope that most of Canada will do okay; we are much more socially cohesive than many. However, I expect that wide swathes of the US are going to go completely apeshit... and that could end up making our efforts to keep it together up here almost impossible, as our much larger neighbour starts looking for resources and doesn't feel picky about how it gets them.

Oil indepedance is what they're trying to get rid of

Oh, don't make the mistake of thinking that I support what Obama is doing either. this is a just a political move to keep the wingnuts moderately placated while he and the other wing of America's one-party "democracy" hope things will look different by 2014. I'm not convinced there's any offshore oil in any supply that will make a difference when it comes to America's dependence on fossil fuels. From everything I've read, we won't even know for sure for at least a decade.

I'm not panicking in any case. Still plenty of water and rich arable land in Ontario and Quebec. And with global warming, we might even have longer growing seasons and agriculture at higher latitudes. Since agriculture in those provinces is pretty diverse, we might get by more easily than drought-stricken prairies which have been given over to monocultures of crops that can't be grown nor eaten without fossils fuels for planting, harvesting and processing.

Not only will the Westerners have to learn how to grow food again (barely a fraction of them are engaged in agriculture and not a lot of that resembles actual farming), they may also have to learn to eat oil and potash directly.