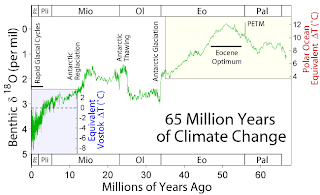 From Bloomberg, this story about Japan's attempts to wean itself from imported energy by drilling for methane hydrate:

Dec. 26 (Bloomberg) -- Fifty-five million years ago the world's climate was catastrophically changed when volcanoes melted natural gas frozen in the seabed. Now Japan plans to drill for the same icy crystals to end its reliance on imported energy.
A small problem, however:
While governments are attracted to an abundant clean fuel, drilling risks disturbing the seabed and triggering an uncontrolled release, says Matsumoto of the University of Tokyo.
``A mass release of methane into the sea and the atmosphere is a risk for global warming,'' he says. ``Massive landslides at the ocean floor must be avoided when drilling at the Nankai Trough.''
The uncontrolled release of methane has already been tagged as the likely culprit in at least one mass extinction, and some of the dangers inherent in extracting the stuff are outlined here. These dangers can be summed up as follows: "Can we mine [methane hydrates] without triggering a disaster that makes the K-T event look mild by comparison"?
And the most interesting thing about the Japanese efforts is that Natural Resources Canada (Gary Lunn's department) is pitching in to help out:
Through the Geological Survey of Canada, ESS [Earth Sciences Sector] is a leader in the Mallik 2002 Production Research Well Program, one of the world's most important gas hydrates research programs. This project is a partnership with an international consortium of researchers from Canada, Japan, the US, Germany, and India. The Mallik research well site, located in the Mackenzie Delta in the Northwest Territories, represents one of the highest concentrations of gas hydrates found to date in the world.
Now that's rolling the dice big-time, in a manner Brian Mulroney probably could never have conceived of. And I'm not sure its the kind of project I want to see my tax dollars paying for.
PS. Yeah but what does the graph mean? On it "PETM" refers to Palaeocene/Eocene thermal maximum, the time of mass extinction thought to have been caused by a vast release of methane hydrate caused by an ongoing bout of global warming. I should have worked that into the body of the post, but forgot and now I'm too lazy.

Since there is no evidence that CO2 has any impact on climate change, I'll bet you that methane hydrate won't have any impact either.

You just can't create enough fearmongering, can you?

It will be good for Canada. Someone other than polar bears will be able to live on that now frozen plain. Maybe you guys should just trigger it on your own. Let me know so I can short Bangladeshi real estate.