"I would say we all learned some lessons," she said of the brouhaha she sparked when she complained to Speaker Peter Milliken on Wednesday about seeing the image on the laptop of Moore, who sits in front of her in the Commons.

The two lessons, Mathyssen said, were: "I should have spoken to him (Moore); and he, that his personal photos do not belong on the floor of the House of Commons. I regret I didn't speak to him first because his behaviour was inappropriate." 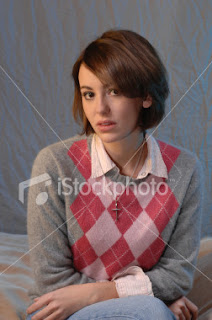 he evangelical office girl down the hall (the one who has pamphlets on her desk) and see what happens. The problem is, of course, that she's so damned hot in those tight sweaters that your mind is fairly overwhelmed with images of spanking her in the columbarium, and nailing her stand-up style against the chancel railing...

The point is, I suppose, where would you rather have people like Irene Mathyssen? Out on the street, or in Parliament where they can't do too much damage.

surely there's a time and place. even if these truly are cough cough
of his girlfriend, they don't belong in the house.

would you want van loan leering at your missus?

Or John Baird leering at your boyfriend.

I hope this is a learning experience for progressives. When it comes to Conservatives, it's perfectly OK to imply that your adversaries are pedophiles and terrorist supporters, but it is beyond the pale to accuse an adversary of a mild moral lapse based on a mistaken understanding of the facts.

That's why I love calling Conservatives nazis and couldn't care less whether they think I have the evidence to back it up. If you're going to smear, go big!

By the way, a fatuous editorial in today's Globe described Moore as a "bright young light." Man, that's a contortion worthy of a live sex show.

Not a bad blog really.

If you're going to smear, go big! Ti-guy just summed up his political philosophy.

If you're going to smear, go big! Ti-guy just summed up his political philosophy.

No I didn't, you kid-toucher.

Your sexual fantasies are pretty aggressive, I for one find them an explanation for why you don't get that Moore was in the wrong. Normally I like your blog.

He's obviously exaggerating. Hot Evangelicals? Most of the ones I ever met look like Deborah Grey (who, I hasten to add I have high regard for as a person).

Lighten up, Little Lord Fauntleroy and Susan.
Ti-Guy,
I share your admiration for Deborah Grey. I've never told anyone before.

I was trying to figure out who "Little Lord Fauntleroy" referred to, so I reviewed the comments.

"That's why I love calling Conservatives nazis and couldn't care less whether they think I have the evidence to back it up. If you're going to smear, go big!"

You're a real piece of work aren't you. You deride people who call others Nazi all the time, can't wait to scream GODWIN'S LAW! GODWIN'S LAW! or whatever the hell it is, and then you've got the hypocrisy to claim you LOVE doing it even without evidence of any sort.

Liberals truly have no shame, no class, and no sense of decency.

Like your position on gun control, global warming, and 'social justice' issues, evidence and facts are anathema to the Liberal ideology.

You deride people who call others Nazi all the time

When? I usually find accusations of nazism hilarious...soup-nazi, grammar-nazi, conserva-nazi. As long as it's related to authoritarianism of some nature, it's just hyperbole. When you Conservatives compare everything you don't like to nazism and (bafflingly) Stalinism, quite often at the same time, that's just stupid.

can't wait to scream GODWIN'S LAW! GODWIN'S LAW! or whatever the hell it is, and then you've got the hypocrisy to claim you LOVE doing it even without evidence of any sort.

Don't be so stupid. Godwin's Law is a statement of probability; the longer a internet discussion goes on, the closer the probability of someone mentioning Hitler/Nazism approaches 1.

It's not a description of some sort of fallacy that's invoked whenever someone accuses someone else of being a nazi. Some people (like conserva-nazis) really are nazis.

Liberals truly have no shame, no class, and no sense of decency.

Oh, who are you again? Ontario Lad?

God, calm down, you drooling redneck.

I think they are both deserving of ridicule, although I think the scales are tilting towards Ms. M as to who is more ridiculous.

If you find these fantasies too aggressive, let me know what you like and next time I'll do a "custom".

So politically incorrect, so refreshing and true :)

Let the MP who hasn't wasted time surfing the internet, or personal email, on my dime, be the first to through a stone.