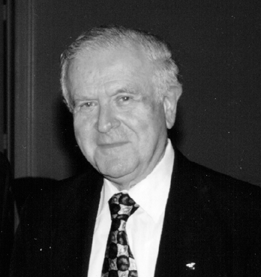 Funny what things you discover using Wikipedia. S. Fred Singer, de facto leader of the Climate Change Skeptics that met at this weeks DeniaPalooza festival in New York City, once served as special adviser to Dwight Eisenhower. And he once advised the President that:

March 1960: The Martian moon Phobos, generally accepted as a celestial body, actually may be an artificial satellite launched long ago by an advanced Martian race, according to Dr. S. Fred Singer...No mention was made of the other Mars moon, Deimos.
Now he thinks Global Warming is caused by "solar cycles".
To be fair, his more recent views on the Martian moons are a little less out there.

He's my favourite neocon. That permanent smirk of his is less malign than the ones the others usually put on...he actually looks like he's having fun denying science and lying all the time.

He's a denier I'd like to have a beer with.

The Russians said that
Phobos was an artificial moon.

You're going back 48 years, from before the 'space age', to find a comment meant to discredit him today, on a different subject?

You're going back 48 years, from before the 'space age', to find a comment meant to discredit him today, on a different subject?

Talk about misunderstanding. When it comes to science, suggesting Phobos is an artificial satellite is about the most plausible hypothesis that man has ever advanced or supported.

In most issues he's been involved with, he hasn't even been wrong, like he was here.

Well, since bigcitylib isn't on Wiki, I guess it means you don't exist.

And from the same credible website BCL uses as a source, you can read how Eisenhower met with aliens. Really!!

Ike and the Aliens
http://www.presidentialufo.com/ike&the.htm

S. Fred Singer is internationally known for his work on energy and environmental issues. A pioneer in the development of rocket and satellite technology, he devised the basic instrument for measuring stratospheric ozone and was principal investigator on a satellite experiment retrieved by the space shuttle in 1990. He was the first scientist to predict that population growth would increase atmospheric methane--an important greenhouse gas.

Now President of The Science & Environmental Policy Project, a non-profit policy research group he founded in 1990, Singer is also Distinguished Research Professor at George Mason University and professor emeritus of environmental science at the University of Virginia. His previous government and academic positions include Chief Scientist, U.S. Department of Transportation (1987- 89); Deputy Assistant Administrator for Policy, U.S. Environmental Protection Agency (1970-71); Deputy Assistant Secretary for Water Quality and Research, U.S. Department of the Interior (1967- 70); founding Dean of the School of Environmental and Planetary Sciences, University of Miami (1964-67); first Director of the National Weather Satellite Service (1962-64); and Director of the Center for Atmospheric and Space Physics, University of Maryland (1953-62); Research Physicist, Upper Atmosphere Rocket Program, JHU/APL (1946-50).

Singer has received numerous awards for his research, including a Special Commendation from the White House for achievements in artificial earth satellites, a U.S. Department of Commerce Gold Medal Award for the development and management of the U.S. weather satellite program, and the first Science Medal from the British Interplanetary Society. He has served on state and federal advisory panels, including five years as vice chairman of the National Advisory Committee on Oceans and Atmospheres. He frequently testifies before Congress.

Singer did his undergraduate work in electrical engineering at Ohio State University and holds a Ph.D. in physics from Princeton University. He is the author or editor of more than a dozen books and monographs, including Is There an Optimum Level of Population? (McGraw-Hill, 1971), Free Market Energy (Universe Books, 1984), and Global Climate Change (Paragon House, 1989). Singer has also published more than 400 technical papers in scientific, economic, and public policy journals, as well as numerous editorial essays and articles in The Wall Street Journal, New York Times, New Republic, Newsweek, Journal of Commerce, Washington Times, Washington Post, and other publications. His latest book, Hot Talk, Cold Science: Global Warming's Unfinished Debate, was published in late 1997 through the Independent Institute.

Anon, 4:24, yeah but he also thought Phobos was an alien base! Cuz The Russkys told him so!

I know you don't care about plagiarism, circular references and research anon @ 4:29...and that helps tremendously when one is exposing the denial of science.

well I certainly hope all the Good Believers down yonder there in 'tranna are enjoying your mega dose of global warming on this fine March day.

Warmongers unite and slay the Denialist Heretics among us.

"I know you don't care about plagiarism, circular references and research anon @ 4:29...and that helps tremendously when one is exposing the denial of science."

And anony has made it clear that he sees nothing discrediting about believing that a moon of Mars is actually an artificial satellite built by Martians.
Is anony a Liberal provocateur?

well I certainly hope all the Good Believers down yonder there in 'tranna are enjoying your mega dose of global warming on this fine March day.

It's sunny and 0C right now.

Take a look at his credentials ti-guy. He's done more in his lifetime than a dozen people. And you think you have any authority to challenge him on anything related to climate? Can you even READ anything above Archie & Jughead?

It's obvious the Martian reference from 1960 was supposed to make him look foolish. Kinda like how all this AGW stuff is going to make you look silly in 5 years.

And you think you have any authority to challenge him on anything related to climate?

And it's not hard to find out when people are bull-shitting you know.

Kinda like how all this AGW stuff is going to make you look silly in 5 years.

You have to understand that for most of us, what science will reliably prove is fine. I'm not worried about looking foolish.

I hope you credulous rubes will at least admit it if/when you do end up in a similar state, but as we all know you never do. You just go quiet. And you've been getting quieter and quieter in the last year, it seems.

Is Harper looking for a replacement for the science advisor he canned?
This guy could keep him appraised of the Martian threat.
You laugh now, but in 5 years when the Martians launch their invasion....

"And you think you have any authority to challenge him on anything related to climate?"

What's to challenge? Has he published anything in any legitimate journal?

You laugh now, but in 5 years when the Martians launch their invasion....

They're looking forward to it. They figure they'll have chance to score with hot Martian babes, since Earthwomen don't seem to be interested.

We've been hit with yet another storm in Ontario.

Can we please avoid talking about global warming until this brutal winter is over.

I feel stupid right now about having bought into the prevailing AGW position. But for those who haven't, can we at least wait until spring arrives. It's like talking about an impending catastrophic drought amidst monsoon rains. It makes(or should make)a person feel downright silly.

"I feel stupid right now about having bought into the prevailing AGW position."

Some people say "ignorance is bliss" and dismiss drooling idiots as having it easy, but your posts reminds us that being stupid can also be a heavy burden.

Yeah, I saw something about Fred Singer on Wiki about 6 months ago. Didn't he co author some flaky paper with another prominent denialist kook? Revel? Revelle? They argued that global warming was nothing to worry about and may actually be beneficial. Then Al Gore sued them. Can't remember anything about how it came out. Gore did some big put down of that Revel guy in his flick, didn't mention Fred Singer tho. Fred Singer, what a scary dude and what's up with that woman who just retired from Nasa going around saying that global warming is entirely based on inaccurate computer models! What was her name? Better check Wiki.

Sleazy Singer lied about Revelle, who was a respected scientist. Read about it here:
http://www.desmogblog.com/national-post-promotes-singers-sleazy-attack-on-al-gores-mentor

THERE IS VERY CREDIBLE EVIDENCE THAT GLOBAL WARMING AND COOLING IS CAUSED BY THE PRESENCE AND ABSENCE OF SUNS SPOTS. IT IS FOR THIS REASON THAT MANY PREDICT A COOLING OFF PERIOD IN THE NEXT NUMBER OF YEARS. IT SURE SEEMS LIKE THE COOLING OFF PERIOD IS WITH US.

BCL You are one to talk you juvenile libtard.

You post information on BIGFOOT of your own website, even doing some radio interview with redneck yahoos about it.

And you posted it on this blog, or have you conveniently forgotten?

Anonymous said...
This comment has been removed by a blog administrator.
9:34 AM

What´s all this "look out your window crap" to deny climate change? I guess some have forgotten the "GLOBAL" part of "global warming". Here in Brazil, I´m looking out at 30 degree day (suckers!), I guess by following their logic, winter doesn´t exist either?

And let´s not forget; Singer, to date, still denies links between smoking and cancer. Just like he was paid to deny years ago.

'Solar cycles' in derisive quotes must mean you believe the sun burns along at a constant rate, unchanging, no fluctuation in radiative emissions, nothing.

More reading required for you.

Well it was a lovely spring day here in Victoria. Which is about what we expect in March. In the rest of the world it is just a little cooler than it was in the Year of Algore, 1998.

That leaves Singer of the once-serious scientists at denialist-granddaddy GMI, although of course he's been doing SEPP for a while.

If you're not familiar with these guys, see 2nd half of Naomi Oreskes' video, http://www.uctv.tv/search-details.asp?showID=13459

dude, back then everyone thought there were Martians and canals on Mars and jungles and swamps with wierd amphibs on Venus. Sheesh. Might as well have it out with Clrake and Asimov as well

The problem with Singer is that each time it was his turn to pay, he'd claim that he could PROVE that he'd already paid for the previous round of drinks and that it was in-fact your turn to pay, even though he hadn't and it wasn't.

Page 3 of the Beran Affidavit
http://home.att.net/~espi/Beran_affidavit.pdf