Obama: Exotic As The Dark Side Of Ur-Anus 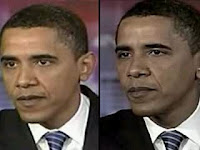 The Republicans are looking for new code words to throw at Obama should he become the Democratic nominee. Apparently they've settled on "exotic". What does that mean?

ROSE: So you think it's a gathering narrative?

MEACHAM: Sure, sure. If you are running against a formidable African-American candidate, and you have a minister who has said ‘God Damn America, ’ and you have the videotapes, always dangerous [grins broadly], you have, I think there's a real risk that the campaign becomes increasingly racialized.

I wish I thought The Dems and the Obama team were clever enough to counter this kind of attack. But uplifting speeches don't cut it down in Dixie, especially when it will be fiery Minister Wright who gets heard again and again going forward.

The only bright spot is that Obama has been able to raise scads of Internet money. Of course, the downside to that upside is that he has raised enough to fuel a disastrous 3rd party run (although the fellow at the end of the link thinks O might win in a 3-way contest).

As for the picture above (the one on the right where Obama gets "blacked up"), the original theory was that it came from the Clinton campaign, but now nobody is really sure. That's how politics work down in the U.S. Nobody smears; the smear simply emerges.

Does it matter which picture is the real one ?

I wish I thought The Dems and the Obama team were clever enough to counter this kind of attack. But uplifting speeches don't cut it down in Dixie

It ain't just in Dixie, BCL. When you have analysis like this...

"PBS can be satirized easily as the network where people display their satisfaction with their own intellectual sophistication, as opposed to those rubes who rely on other networks for their information."

...that is not just restricted to the fat frauds who run NewsBusters, there's just nothing you can do (except of course to tell the fat media frauds to go fuck themselves, something that never seems to occur to a lot of people).

I keep having the same discussion over the last few days with everyone I know (conservatives, liberals, social democrats...doesn't matter) who are shocked about how addicted American media and the American public are to spiraling nonsense; someone says something sensible, some credentialed idiot (like, say, Frank Luntz) says something stupid about it, some sensible person comments on the idiocy, yet another credentialed idiot retaliates and on and on it goes, until someone admits that they had sex and climaxed on a blue dress...that funky garment having recently resurfaced at ABC.

This spectacle has become completely unwatchable, and has never been even remotely entertaining.

BECOMING racialized? Have you HEARD the bitter negativity of the DEMOCRATIC infighting? They, the enlightened, tolerant, politically correct Democrats are pulling out all the nasty tools and you're focusing on the Republicans for some reason? Stop your ignorant tactics and reflect reality for once.

The Dems stuff is trivial compared to what the Republicans will do.

Have you HEARD the bitter negativity of the DEMOCRATIC infighting?

Can you provide an example...other than the Geraldine Ferrarro thing?

The genius with Republicans is that they can code their messaging to present the illusion that it's not bald-faced racism. But when you check how the dog-whistles are being interpreted and reflected by the rank-and-file (and the rightwing blogs and online forums provide us with endless examples of that), you get an idea of what's really going on.

Obama has enough going against him. And the only ones making a big deal about his race are the Democrappers.

Obama is toast . . . he has more baggage than even Socialist Shillery . . . imagine sitting in a pew for 20 odd years listening to that raving reverend . . . who you count among your friends and advisors and then claim he didn't influence your though and that you disagree with his looney positions.
The MSM has soft-peddled this guy right from the start . . . does he have any more skeletons in the closet??

"It's nothing compared with what the Republicans WILL do." Speculation on your part. Look at all the negativity we've seen.

And the Republicans won't ever mention that he's black. The Demotards can mention it all day long, because they're the PC crowd. But there's no way in hell any Republican would be able to say the word 'black' and NOT be instantly crucified as a racist, no matter the context.

No, the ugliest part of the campaign is happening right now. The democrats have defined the campaign right now as a battle between the misogynists and the racists.

His comments are precious distillations of complex wingnut stupidity. One comment from Unschooled is the equivalent of a week's worth of posts and comments from The Blogging Tories.

The Republicans are enjoying every minute of this.

The Republicans are enjoying every minute of trolling airport toilets for sex.

Hillary has a mad-on because she's trying to play the gender card while Obama is playing the black card, and the democrats are in a tizzy over which is worse/better/demands more sympathy because they were more oppressed by white males. Cue John McCain.

Anonymous said...
This comment has been removed by a blog administrator.
3:35 PM

For what? A commercial for Depends?

Anonymous said...
This comment has been removed by a blog administrator.
5:20 PM

Seeing as how the MSM is entirely left-wing...

Anonymous said...
This comment has been removed by a blog administrator.
7:19 PM

When called on the grandmother thing, on tv he said:

"The point I was making was not that my grandmother harbors any racial animosity," he said. "But she is a typical white person. If she sees somebody on the street that she doesn't know. . .there's a reaction that's been bred into her experiences that doesn't go away and it comes out in the wrong way."

Hmmmm. Imagine if a white person said that about a (insert non-white race of your choice here) person.

Obamasiah, here to heal our racial divisions, by pointing out one "typical white person" at a time. Starting with those who loved him most.

Hmmmm. Imagine if a white person said that about a (insert non-white race of your choice here) person.

I don't have to imagine anything. I can just go over to KKKate's and pick a post at random.

Goose-step on back to Stormfront/FD, Markus. And take the Biffs with you.

The deletions here are pathetic. I read them. None offensive, just opposite to what you believe.

I won't be returning.

And the droning of ti-guy.

If Obama was white the Clintons would be throwing in the towel because the delegate math just isn't there. They played the race card in South Carolina with Bill comparing Obama's dominance there to Jesse Jackson etc...they think they can marginalize Obama.

There were howls of outrage at the time but now their backs are at the proverbial wall so they're playing it again.

The Clintons have lost the primary race numerically so now they basically have to take Obama out, metaphorically kneecap him. If anyone can do it the Clintons can - they're nothing if not unscrupulous, power-hungry and sociopathic. They will stop at nothing to destroy Obama.

See my predictions for the recent by-elections just before the polls closed Monday and posted at Calgary Grit. Bang on the money. Maybe I should get to guest-post here?

Maybe I should get to guest-post here?

Or BCL could just plug in a vacuum cleaner and have it drone on and on and on. That would work too.

Commenter 1 makes a point in disagreement with BCL

ti-guy: snide childish remark about commenter 1 in which he calls commenter 1 at least 5 different derogatory names

ti-guy: revels with BCL in his smear

ti-guy: again revels in his own smearing

ti-guy: another smear (note ti-guy will invariably leave the last comment on a thread, sort of like a mongrel pissing on a pile of garbage so as to mark it as his own

"The smear just emerges" and we leave it to the fertile imaginations of the troofer crowd to put the blame squarely on the Republicans.