Not That There's Anything Wrong With That 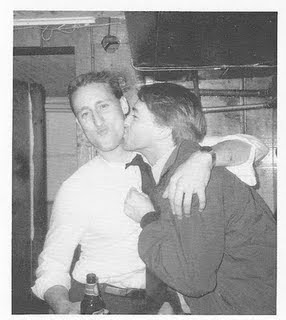 A picture of Peter MacKay (left) from the Dalhousie yearbook, sent in anonymously.

Our guys are hotter.

real easy on the eyes, our two.

I dunno - I've always had this weird... thing for MacKay. Something about men in tears gets me every time.

But yeah, Kennedy is absolutely the hottest thing in Parliament. Mmmm... Justin is sweet too, although he's never gotten me quite as moist as most of his other female admirers. He's a little young for my taste.

If you look at the CPC caucus, the Lib caucus and the NDP caucus...I think the Lib win hands down.

I saw a comment on Calgary Grit - saying they thought MacKay looked like a praying mantis....he does

Couple of girly-men. Give us a pic of Danielle Smith.

MacKay NEVER attracted me physically. Reminded me too much of Mulrooney. Both are all chin. And the eyes have no soul.