Gov. Gen. Michaelle Jean (picture left) was confronted Sunday by Members of the Canadian chapter of Fathers for Justice. These guys were founded originally by an Englishman named Matt O'Connor, who became angry when a judge barred him from seeing his two young sons outside of a contact centre, following separation from his wife in 2000. They are best known for such stunts as dressing up as super-heros and climbing large structures in protest, which they have done in London, Toronto (though I must have missed that incident), and Vancouver. The English branch of the operation disbanded early this year after news of an alleged plot to kidnap the son of English PM Tony Blair. In this case, however, one of their Canadian leaders, Daniel Laforest, merely presented the AG with a book of statistics, and claimed that violence against male spouses was an overlooked issue:

I have studies here that say violence against men is also serious--different, yet as serious as it is against women but no one is listening. 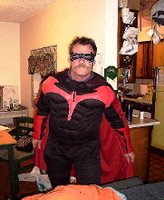 tually, "father's rights" is not an entirely vacuous concept, and I have to confess to a certain amount of admiration for anyone who would dress like this and climb a bridge in protest, whatever it was they were protesting. But while the Fathers' new website is pretty much content free (more on the French than English side, however), the old one is a stew of crazy conspiracy theories, including some "New World Order Stuff", "9-11 was done by the government stuff", and "The Freemasons are after us" stuff. In fact it seems to have pretty much all the bases covered, conspiracy-wise.

Not surprisingly, the Father's main concern is the fact that that the nation is run by "Feminazis" who have seized control of our court system and who want to create a society which is "father free".

So, are they nutters? It sure looks like it, but as long as they stay harmless, they seem fairly entertaining ones. It should be noted, however, that some of their English counterparts were apparently kept away from their children for good reason, and some of their less charming modes of protest included sending fake bombs and pushing rotten fish through letter-boxes (an extremely effective means of protest, this last one, especially if you can slip a dead fish into the AC system of the protestee's car. You know those vents on the dash, under the bottom of the windshield? A couple of sardines fit into those just perfect. Try it in mid-July).

Posted by bigcitylib at 6:00 AM

Whooee! These FFJ guys is pretty much outta the mainstream when it comes t' the Fathers' Rights issue. There's sum other outfits who ain't as flamboyant but who's workin' against gender discrimination in the family court system.

Fact is, BigCity, plenty o' men get the shaft from the courts when it comes t' access, visitation an' custody. When a woman accuses a man of abusin' her or the kids, the courts is predisposed t' buyin' that story. If a man sez he's abused or the kiddies are abused by the mama, the courts look fer mitigatin' circumstances an' hardly ever take kiddies away from abusive mothers.

There's a whole lot o' fathers who wanna be good daddies but they can't get near their kids on accounta their exes is disobeyin' court orders an' gettin' away with it.

Women ain't been treated fair in lotsa places like the boardrooms an' in parliment. That don't give 'em a license t' be unfair when it comes t' what's best fer kids. Kids do better when they know they got two parents who love 'em. When mamas keep daddies away from the kids on accounta they're bein' vindictive, they're not doin' what's best fer the kiddies.