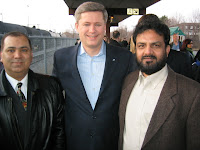 Here's a photo of Stephen Harper with representatives of MQM Canada (from their website). And who is the MQM?

...a Pakistani political party that human rights groups and even Canadian officials say has a violent past.

"The MQM has a long and well-deserved reputation for violence, extortion and other criminal acts such as murder," said Tom Quiggin, a former RCMP terrorism expert now working at Nanyang Technological University in Singapore.

The MQM Canada backed Stephen Harper's Tories in both 2004 and 2006, and the front-page of their website promotes the MQM/Tory connection in both pictures and text. As they say, hmmm! Someone's got some explaining to do.

Just a quickie update: The wiki article on the MQM says that they have partially withdrawn from the terror business in the past decade or so, but:

... it is still involved in 'jagga tax' extortion in areas of its influence in Karachi and other urban parts of the province of Sindh

Note too: anyone who reaches this story from ProgBlogs will see the header as "Harper Consorts with Pakistani Terrorists", which is factually incorrect. I wrote it, published, and rewrote the title, but the aggregator caught me between drafts. Whoopsie!

which national pary is beholdne to extremists again???

They have "partially" withdrawn from terrism??? Partially?

This, and Jason Kenney speaking to terrorist groups - the idiots like "canuckistanian" have a nerve don't they?

But at least he's never had his picture taken with Maurice Strong.

What, was that picture taken at a bus stop or parking lot? Gee, that's pretty damning. Harper's out talking to people and these guys say "Mr. Harper, can we get a picture with you?"

Not like he was in a parade with them, or speaking at one of their functions. Or courting them for contributions, after KNOWING they were on the terrorist list.

He should have known the background of the group he was dealing with; its a quick google search and, after all, this group ENDORSED the CPoC TWICE.

Sure, THEY endorsed the CPC. But did the CPC endorse them? Hell, my splinter group of Left-Handed Druids for Engineering, Lax Government and Anti-Gravity could endorse the Liberal Party (well, on second thought, no, we're not insane). Entirely without their knowledge. So it's meaningless.