From a Calgary Herald editorial noting a possible new route for the Keystone XL:

This is kind of vague, but it sounds most like what is called the I-90 Corridor Alternative, which was originally proposed to get the pipe around Sandhills and the Ogallala Aquifer (the environmental sensitivity of which is one major cause of Keystone XL's political problems in the first place).  Since it has been given a name, we can assume that this alternate pathway already been thought of.  And it has.  From the draft EIS (Environmental Impact Statement), some of the reasons it was rejected in the first place include:

There's far more.  As in: the I-90 Alternative would effect more sensitive wetlands, more farmland, cross more streams, and etc.  than the current route.  Here's a handy chart from the Draft EIS linked above: 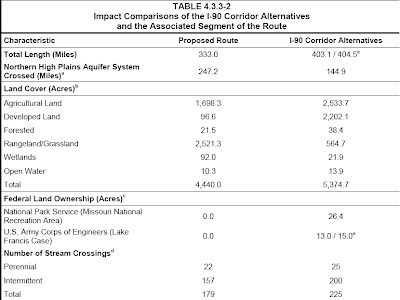 From the EIS conclusion:

In summary, the I-90 Corridor Alternatives would not eliminate the risk of an accidental release from the pipeline, but would simply transfer that same risk from one portion of the NHPAQ to other groundwater aquifers, including other shallow aquifers within Nebraska. Additionally, as depicted in Figure 4.3.3-6, the risk would be transferred from an area of relatively low ongoing groundwater usage within the Sand Hills topographic region to areas of high ongoing groundwater usage elsewhere.
[...]

In addition, the comparisons of key environmental issues and the greater area of impact of the I-90 Corridor Alternatives suggest that the alternatives would not offer an overall environmental advantage over the proposed Project route. Finally, crossing Lake Francis Case using the HDD method may not be technically feasible due to the length of the crossing, the height of the bluff on the eastern shore of the lake, and the depth of required boring. Detailed engineering studies would be required to determine whether or not the HDD crossing is technically feasible, including geotechnical studies to determine whether or not the soil conditions in the bluff and under the river would be receptive to using HDD. If HDD is not suitable, a wet-cut crossing using barges and bottom dredging would likely be required. With this method there would be substantial construction impacts to water quality, fisheries habitats, benthic communities, and recreational uses as compared to the impacts of the proposed Project.


As a result of these considerations, the I-90 Corridor Alternatives were eliminated at the screening level from further consideration.

Now, as I say, the two line paragraph in the Herald is quite vague.  It might also be referring to the Keystone Corridor Alternative (you can see a map of the alternative routes here).  Since it also has been given a name, you know its been thought of too, and is even worse that the I-90 solution.

So the bottom line is that the proposed route is almost certainly the best among the available alternatives.  Thus any rejig simply transfers the environmental risk to some place other than Sandhills, and increases it overall.  If the Obama administration can't get behind the current route, it would be even more difficult to get behind any of its major competitors.  And note too that Nebraska lawmakers themselves are only talking about moves that would increase the pipe length by 30 or 40 miles, which doesn't sound like any of the possibilities considered in the EIS and which, therefore, will almost certainly not solve the problem of the pipe's crossing Nebraska's environmentally sensitive areas in the first place.

The Keystone XL may be closer to death than I first thought, especially since any agreement between TransCanada and the State of Nebraska will not alter the timing of the Obama administration decision.