The End Of The Canadian Lighthouse Keeper? 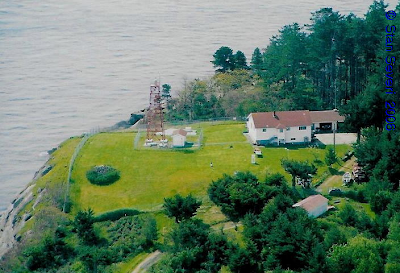 Since at least the late 1980s, every couple of years whatever government is in power floats a plan to save money by automating Canada's remaining manned lighthouses, and sending Canada's last few dozen lightkeepers into retirement. Harper's Torys are behind the latest attempt.

Now, there are economic arguments to be made on the government's side--you don't have to pay wages to an automated lighthouse--and safety issues on the side of the lightkeepers: in an emergency, a real human being can be much more useful than a flashing light. But my own views on the matter are shaped as much by nostalgia as anything else. You see, my father served as lightkeeper at the East Point Lighthouse on Saturna Island, which is off the Coast of Vancouver Island, British Columbia.

When dad left the armed forces in the mid-1970s, he spent a couple of years going from job to job before he could gather enough of a modern education to start his new career in the civilian work-force. One of those jobs was to serve in the capacity of temporary keeper at East Point, during about a six month period between the time the previous keeper retired and the time his permanent replacement arrived to take over. My brother and I lived most of one summer in that house in the top right-hand quarter of the picture above.

I'd like to say it was one of the highlights of my childhood, but for the most part that was a pretty boring summer. The town of Saturna is about ten miles across the island, and since I arrived after the school year and was too young to drive, I never really got a chance to meet any other island kids.

But there were interesting moments. For example, isolation had driven dad's predecessors to study the island around them in minute detail, and they had made large and thorough collections of the local butterfly species, of beetles, snail-shells, pine-cones, and so on, and arranged them all in glass display cases. They also had a very extensive collection of books on the local wild-life. I spent many hours poring through these, and many more tramping around that end of the island, looking for the animals in the pictures.

Not only that, time and solitude had turned one of the early lightkeepers towards folk-art. Down by the shoreline (at the very top end of the picture) you could find relief chiselings of killer whales in the soft sandstone that is unique to the place. These were crafted in iconic fashion, as though meant to represent the spirit of East Point, and there were a dozen of so of them carved here and there among the rocks, in hidden places as though the artist had intended them to remain a secret. Since the lighthouse was built in 1888, I am sure these carvings are over a century old by now.

And if you stayed at East Point long enough, you came to understand why the old lightkeeper would have chosen to represent this particular creature. As I say, that end of Saturna Island is all sandstone, and easily eroded by ocean currents. So the "shore" is a really just a rock shelf, maybe three inches thick, that juts straight out over water more than 600 feet deep. And every week or so a pod of Orcas would swim past, sometimes not 10 feet away from the ledge you were standing on, so close that you could see their eyes under the water, watching you, so close that you could have jumped right onto their backs. It made me feel dizzy when I first saw them.


And I remember on one occasion several oceanographers motored past just behind a family of whales in an inflatable, looking ridiculously fragile among animals three times the length of their boat. They yelled over to me and made me write down a phone-number; later I dialled it and told the voice at the other end that "J Pod" was heading North at East Point. 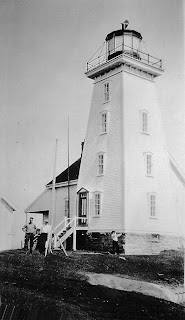 Another thing: if you look at the picture above, the lighthouse proper has been replaced by a metal skeleton. But when my dad kept East Point, the original structure still stood (as left). In fact, given the dates I've found here, I imagine I am one of the last people to have been inside the old tower. Once again, I'd like to say that this was a fascinating experience, but in fact the tower was a plain, off-white building that contained very little beyond a generator room, a winding staircase, and the light room up top. The only thing that really made an impression on me was the light-house keepers log, which contained page after page of coded short-hand that seemed quite magical even after you realized that all it symbolized was the state of the equipment and names of the occasional tanker that would steam past.

Anyway, it must have been an incredibly lonely existence for the permanent keepers. I remember the 2nd time we arrived on the island, near midnight one evening after taking the day's last car ferry. When we drove up to East Point we could hear my dad having an intense conversation with two of the dogs that came with the place. Needless to say, he was happy to see us.

So I kind of hope that this latest effort to automate our last manned lighthouses goes the way of the rest of the others. I don't particularly care if they aren't the most economically efficient devices on the planet. I just like them.

PS. Yes I've recycled this post from an earlier one I did back in 2007. So what? I like it and nobody was reading this blog back then?

Posted by bigcitylib at 7:01 AM

What a charming, & interesting, post. I enjoyed it & it is a good respite from the madness all around us.

I suppose at that age, lighthouse life did have boring moments but I confess, that at this stage of my life, it sounds wonderful.

Put Harper in it then shut down the ferry.

Where I grew on Lake Huron, there were two light houses.,one at the mouth of the Saugeen river, and one on an island,and are lined up.They are a lovely site from the past,but still steer boats today.
Thank goodness they are original, but not manned.

I thought that picture looked familiar. I was out there just 2 months ago.

Thanks for the story. I wish I had read it before I went. Saturna seems to be the remote gulf island.