Iggy On The Tar Sands 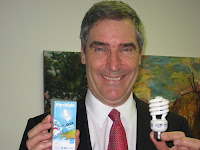 Yes this kind of thing gives me a stomach ache, but the political point of it is clear and difficult to argue with. With grownups arriving in Washington, the environmental issues surrounding the Alberta tar sands have gone global. In a sense, this is a thing to be profoundly wished for: Alberta can't threaten to secede from the United States, and with the proposed pipe-lines out of the area stalled, maybe dead, they only have but the one customer. As Gwyn Dyer argued here, the notion of Calgary employing the "oil weapon" is pathetic, so the Obama administration has both the ability and the motivation to demand serious movement on this file (motivation because, after all, the tar sands are located in a foreign land and attacking them has very little in the way of a domestic downside).

In the end, we get an Alberta that doesn't resemble the ass-side of the moon, and all is well, though as Canadians we get our noses rubbed in the fact that it is probably more useful to lobby the U.S. rather than Canadian gov. over environmental issues.
But this does not mean, as one of Steve's commenters has suggested, that Iggy (or any Canadian politician) should try and get "on the good side" of the issue. By definition, the fact that the development of the tar-sands is largely out of the hands of Canadians means it doesn't matter what side of the issue he's on. So let him pander. Its harmless and might help win a seat or two out West (though not in Alberta). I thought it was 100% puke-worthy when Dalton McGuinty renamed the 401 the "Highway of Heros", but it went down well with the public and he won relection and now in fact he probably qualifies as the "greenest" premier in the land.
Moreover, if the Libs have any smarts, Kinsella's in the back room somewhere teaching Iggy how to eat pork rinds without a fork.
h/t TPB.

Posted by bigcitylib at 6:41 AM

I sent an email to Michael's office, near Toronto, and told him how disappointed I was about what he said re: the Tar Sands and his remark about National Geographic. I also mentioned he was acting like Jim Prentice.

The National Geographic piece Ignatieff dismissed is far more cogent than anything he's written in the pages of Prospect.

And yet he sniffs at it: what would he, the great intellectual, have to learn from National Geographic? He knows all he needs to know. No one can tell him anything.

The signs have been there for a long time that Ignatieff adopts whatever position he thinks will be to his short-term political advantage.

Did it ever occur to you that Iggy could turn this around on the Conservatives? They never took the environment seriously - and why not have a environmental program that helps the environment and the oil sands?

Also, he could turn it around ont he "US" oil companies for their lack of conscience on this.

Whooee! Until I see a big backlash from rank-and-file Libs, I'm gonna be sorely disappointed.

Prince Igor is thumbing his nose at ol' Mother Earth while he's closing his mind to information about the harm being done to Canadians by this ill-advised rape of the planet.

Right now, it's hard to tell the difference between Harper and Iggy. Earth rapers. Planet poisoners. Peas in a pollutin' pod.

Is Iggy just pandering? Or is this what he really thinks?

He has a lot of ground to cover before I'll vote Liberal again.

There is no need to employ oil as a "weapon" because there are plenty of buyers.

-*Snore*- Nothing so tiring as another sanctimonious pretend greenie.

If Liberals ever want to be relevant as a national party again, there are going to have to make some kind of accommodation with the tarsands.

Lefties unhappy with Iggy's position can parachute over to the the NDP where they probably belong anyways.

Don't underestimate the wily Western plains-dwellers: First they join, *then* they secede.

Ignatieff was chosen to appeal to the center right. He is selling himself to Canadians as a less dogmatic and less adversarial version of "strong leader".