What Colour Is Frieda Pinto? 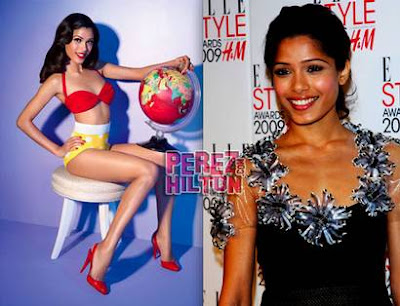 Its long been a tradition for Chinese language papers to give everyone "oriental eyes" in their photos, which is a custom I've never understood either. But it seems that this is a relatively new phenomenon in "Western" publications. And while skin lighteners have always sold well among certain ethnic sub-populations, I always thought they were an internal hang-up, that they didn't matter to the larger "us".

By the way, the wife and I saw "Slumdog Millionaire" this weekend and it is a terrific piece of movie making. Hopefully, it cleans up on Oscar night. There probably ought to be a couple of acting nominations in there as well but, apparently, nobody in Hollywood can pronounce the names.

PS. The wife tells me that they argued over this shot on Entertainment Tonight, and that they are claiming its all the lighting angle. Of course, this begs the question: did Vanity Fair fiddle with the lighting to get that effect or is it just an accident? Hard to imagine the latter.

I think they chose that pose, clothes and colour of skin for the maximum insult to women everywhere. I wish ambitious and beautiful women would just say no to this sort of thing, but I guess adoration is addictive (and profitable), and however you can get it.....

Lol... I'm brown, and it's a lighting thing. Some pics make me look white, others, brownish - depending on the lighting, color of background, and clothes I'm wearing. Having said that, I wouldn't put it past a "middle American" publication like Vanity Fair to set the lighting/colors for that effect on purpose - it's what photographers do all the time...

... And what's with that pose? Is it supposed to be the resurgence of the "pin-up girl" in minority mode? I guess an American actress would have been more controversial in the same pose?

Anonymous said...
This comment has been removed by a blog administrator.
9:42 PM

Such an asian thing.
:p