Kellie Leitch Fundraises Off Me 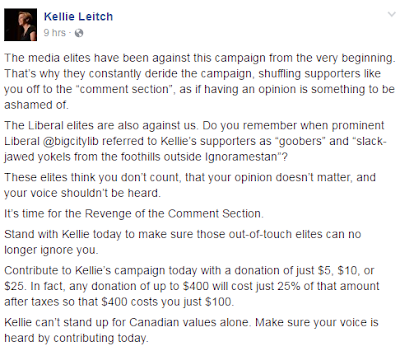 She's got the twitter address wrong, but yeah she's talking about me, as Nick Kouvalis helpfully clarified:

@FraserFraserdw they all know it's @Bigcitylib2 that we're talking about. They don't like us. @EvanLSolomon
— Nick Kouvalis (@NickKouvalis) November 30, 2016

Firstly, I'd like to thank Ms. Leitch and Mr. Kouvalis.  I don't think anyone's ever called me "elite" before, not even my mom, or my wife, though I may ask her to start.  As for being a "prominent" Liberal, I'll include that in my Senate application form.  Speaking of which, where on the Senate website is there a floor-plan, so you can choose your seat?  Or do they leave that for a later date?

Posted by bigcitylib at 8:50 PM 6 comments

On Those Pipeline Decisions

Here is one of what will be many stories.

So, start with some facts and probabilities.

Northern Gateway is dead.  That's a piece of good news.  Line 3 nobody heard of until today, so who knows?   Also, who knows about Keystone.  That decision is not really in Canadian hands.

Energy East looks less likely to me.  The Trudeau gov. will take a big political hit for this in B.C. They won't risk the equivalent in Que. where they have more seats in the HOC.   Also, "the market" never cared much for Energy East; there's more money to be made if oil flows West to China than East to who knows where?

Now there's a pretty solid case to be made for the govs' position.  Put simply; Alberta deserves a pipe-line. I'm lazy right now so  I'll just quote stuff I wrote earlier on this, ironically enough about Energy East:

There's a matter of intellectual consistency at issue here.  If you are arguing that taking appropriate measures to obtain "social license" will get the province a pipeline or two, but really mean no way no how, than you are being  dishonest.   Why would a future Kenney government keep a Notley carbon tax if they could plausibly argue that it had brought them no credit?

That said,  BCers are going to go ape-shit.  When most people think of "Western Alienation" they think of whining Albertans.  But we BC natives range from artists to tech capitalists to first nation's warriors who can move unseen like a shadow in the night to hippies who've learned how to levitate by taking magic mushrooms to fishermen to whatever Van Der Zalm was.  And ranged against them is a bunch of ill-favoured, uncouth tar miners from Lethbridge.  If this becomes a political war, anti-pipeline forces will win in BC (opinion always tilts anti-pipeline when things heat up) and BC will win in the nation as a whole, and if Feds and Alberta try to NEP B.C., B.C. will tear this country a new one, sleep with its women, and leave for someplace better.  Yes, this could escalate into a National Unity issue.

And there's also the issue of the planet itself.  With respect to CO2 emissions, killing or even stalling pipelines is a bit like staunching the bleeding a little.  So I personally believe none of these pipelines go through.  But I'm willing to have the battles won at a more local level, and cut the feds some slack.

Posted by bigcitylib at 6:33 PM 3 comments

There are signs.  Climate change denier Myron Ebell may not get top spot at the EPA:

Myron Ebell, a prominent climate change skeptic who runs the Competitive Enterprise Institute libertarian think tank, has been leading Trump's EPA transition team, but sources said he is not likely to become the administrator.

Furthermore, the bottom couple of paragraphs from a recent article in  Utility Dive, quoting a "Trump Insider", suggest that Trump may have advanced a bit beyond crude climate change denial.  He won't lead an attack on renewables, and further:

There will be “enormous casualties among climate change activities,” the Trump insider said. But, he added, “Trump doesn’t want to turn his back on climate change.”

...which sounds bad, but better than claiming its all a Chinese hoax.  Interestingly enough, the first version of  piece is quite a bit more hard-line:

Trump's back-tracked on  a few issues over the past couple of days.  Maybe this is what we are seeing  here.   On this one it makes sense for him to retreat towards something like the G.W. Bush position.  That is, accept the underlying science and remain onside with the Paris Climate Agreement in theory  (I am hearing stories that his opposition to that may not be set in stone), but in practice do nothing.    Why choose active belligerence when inaction is enough?  Which is bad news, but not as bad as if he were to actively attempt to kneecap the renewables sector.

Posted by bigcitylib at 9:09 PM 3 comments

Was sitting in my favorite working man's pub out in Scarborough today, and heard something which I thought was quite deep.  One of the fellows at the bar said: "If you can't laid in Cuba, you can't get laid anywhere."  Which is a fact that many other people have told me is so.

Perhaps today more than ever we should acknowledge the inherent wisdom of the white working class.

Posted by bigcitylib at 3:43 PM 1 comments