So the condo corp held a big meeting the other night.  They rented a room at the local community center.  They'd already sent around a letter so everyone knew what it was about; the building has Kitec plumbing.  You can look it up but the stuff was manufactured between 1995 and 2007 when the  number of recalls they were getting made them stop.  Under certain circumstances it wail fail prematurely, and when it fails it blows (splits, more technically) and you get floods.  The meeting was held so the condo Board could tell us we would have to pay about $3,500 to $5,000 per bathroom, and maybe more in the townhouses, to get it removed.

So despite the fact that the engineer Atilla wasn't overly communicative, and they had mic problems, it didn't become a shit-show.  I said my bit urging caution--I know a lot of folk in the R.E. profession who think this is more media driven than real (remember UFFI?)--but in the end the decision to re-plumb the whole place had already been made.  And the lady next to me texted her husband while we were sitting there, and confirmed that the insurance company he worked for wouldn't touch houses/apartments with the stuff in it.  Others will hike your rate.  So perhaps it is for the best.

And people took it OK.  Probably the most exciting bit of dissent was when the old Filipino guy got up and said "This will not end well!  You laugh now, but in time you will cry tears of blood!"  And a couple other old guys got up and yelled at the clouds. But the overall mood stayed relatively mellow.

Word at the meeting was that there were 2,000 condo towers around the city with this kind of plumbing in them.  I'm not sure if that's an exaggeration, but there's surely a lot of them.

Posted by bigcitylib at 3:10 PM 5 comments 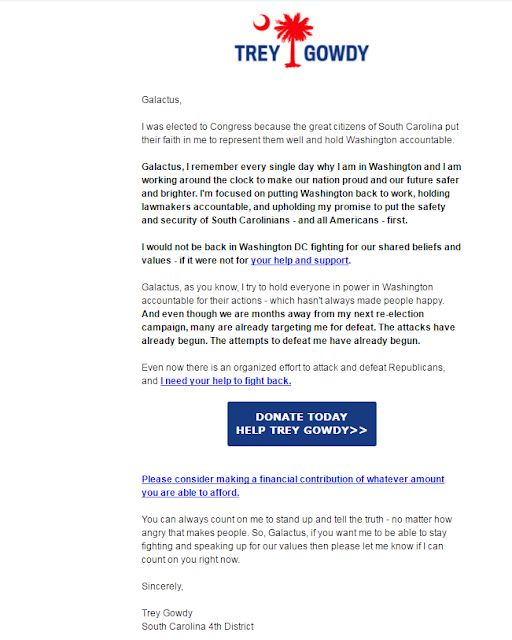 I have contacted Galactus and The Eater Of Worlds is apparently solid GOP.  He will be accessing his pay-pal account and forwarding Mr. Gowdy $5.  The Eater of Worlds is not made out of money.

Posted by bigcitylib at 1:53 PM 0 comments