Horrible behavior but  it wouldn't have happened 50 yrs ago because everyone would have had enough leg room.  I flew Air Canada Rouge (@AirCanadaRouge) in 2018 and it was  like being crew on a WWI submarine.  Something has to change.

Posted by bigcitylib at 6:28 PM 4 comments

WTF happened?  Did the dispatcher pass out just before the storm hit?  Did the plow-guy bust a leg trying to smuggle a hooker into the barracks through a back window?  Or did they stop at VP and say Fuck it its Scarborough lets turn around and plow The Bridle Path twice?  The city's East-end this morning is a snowy hell-scape with near impassable roads!  But the thing is, as soon as you get North of Steeles the streets are bare, even the side-streets...even the arena parking lots.  So it can be done.  And yet Markham Road, the main drag out this way, is like the trail out of Zeballos.  If I wanted to live in the countryside, I would move there.

Scarborough should secede and join Markham, or maybe Pickering, whoever gives the best deal on snow-plow services.  I hear there's always something exciting going on in Pickering.

Email ThisBlogThis!Share to TwitterShare to FacebookShare to Pinterest
Labels: Life In Scarborough, Life In Toronto, Snow

On Dr. Jordan Peterson: The True And Real Story

He's a con artist.  He's got a book, he's got a speaking tour, and when's he's not flogging the book he's flogging his daughter's all meat diet to get his army of fan-boys Manly for the next battle in the Culture Wars.  Real intellectuals don't do that kind of thing. Yes Ben Shapiro sells diet supplements, but it's not a good look on him either.  He's a con artist too.

And yes Peterson is Far Right as anything,  misogynistic but with other dark stuff thrown in for good measure.  Climate change denial, for example.

But mostly the guy is off-the-hook bonkers.  For example, look at this illustration from Maps of Meaning, his first book: 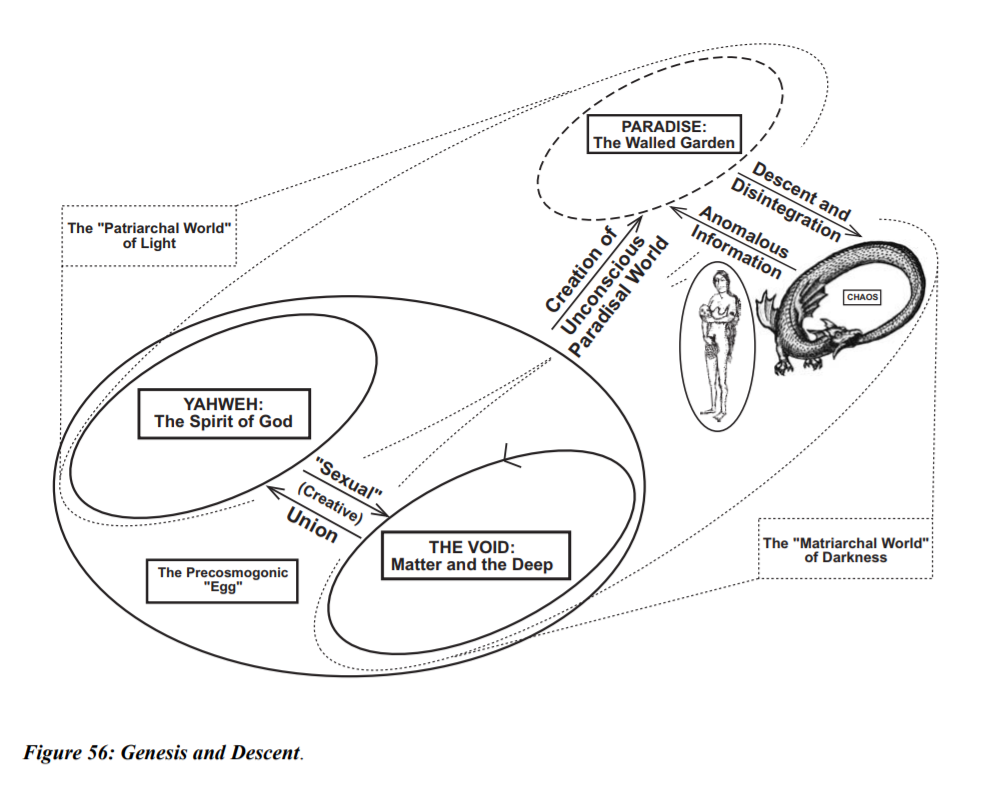 I mean WTF?  I knew a guy on Vancouver Island who drew shit like this, long ago, usually pictures of the Universe with Him at its center.  You'd see him sometimes walking along the Trans-Canada highway barefoot collecting beer-cans in a sack and yelling at the demon perched on his shoulder.  But these days he could probably score a gig opening for Peterson on a Teenage Republican sponsored tour of U.S. campuses.

And there's more!  Peterson wants everyone to act like Lobsters.  In fact he really, really, really digs lobsters, which are admittedly a most noble crustacean, but he takes it to the point where you gotta wonder.  And he once advocated for "enforced monogamy", which is making woman have sex with men they don't like.  Although this may be less a sign of a mental disturbance than an attempt to advocate on behalf of his fans.

Because his fans tend to be what I call Incel-bertarians.  Libertarians are young men who attempt to ground Conservative political beliefs in Rational Theory; Incels are young men who have given up on relationships and are saving to buy a Sexbot.  Therefore: Incel-bertarian.  See?  So Peterson fans are typically young men who aren't getting laid.  Think college Conservative Club members, or that pysch major who would wander around the University cafeteria with a clip-board trying to get people to take his dumb survey.  I suspect Peterson is just trying to show these guys that he is on their side, maybe score them some nooky.

Anyway, he's nuts.  Its hard to spot from the youtube videos sometimes because he drones on endlessly, and the really far-out bits are hidden in a thick fog of Jungian hoo-hah and exhortations to clean your room and floss.  There is also a cottage industry among his followers devoted to reinterpreting his crazy talk to make it sound normal.  Sometimes he loses a few of them; he did over the enforced monogamy thing.  One or two of his people finally said "Fuck it ole Doc Lobster has gone round the bend this time!".  But there seems to be an endless supply of youthful suckers out there willing to step in and "offer context" (ie blow smoke) whenever their guru spouts off like a loon and then needs a rhetorical smoke screen to retreat behind.

And as for the intellectual underpinnings of the stuff he's peddling...the guy's a fucking psychoanalyst!  I didn't know they still existed!  And its old-school psychoanalysis he's talking, not even the hip kind that Frenchy POMOs like Jacques Lacan spun!  Not that Lacan made it any less Bullshit; never take Life Lessons from people who eat snails.  But the point is when I was young that kind of crap was on its way out! Karl Popper had kicked its ass down the stairs!  But now  I wake up and its like they're playing Grand Funk on the radio again.  I get flashbacks, and not the happy trippy kind either. And I also feel a certain amount of guilt from the situation.  Jordan Peterson is a creature from my time!  Or at least his ideas are.

But he's also got me feeling down in regards to today's youth.  Does nobody read Conjectures and Refutations anymore?  How are these young people falling for such ancient rubbish?  Its a bit like Disco.  My generation fought and bled to destroy Disco and now the Millennials are back listening to Disco, flailing about like fools on the dance floor!

So my feelings are ambiguous.

But probably the worst thing about Peterson is he's a Beardist ... 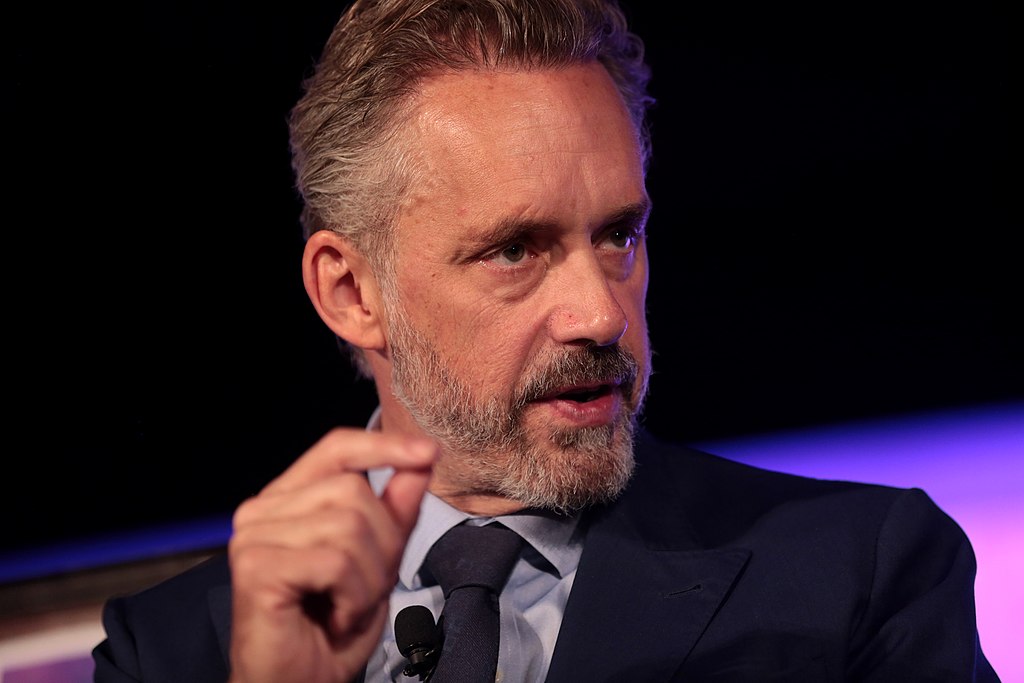 ...meaning he has grown beards and has a favorable opinion of beards and, consciously or not, encourages the maintaining of this disgusting facial hair among his followers.  If I were offering any advice to Peterson fans I would say forget the Feminists, The Cultural Marxists, or cleaning your room.  The worst problem you have is your beard.  Shave the fucking thing.  It doesn't make you manly, it makes you unsanitary.  Scrofulous, in fact.  You don't need one unless you lack a proper chin.  And you're never going to be a Viking; you're going to work for minimum wage in a job that has been deemed too unsafe for the company robots.  That beard might get caught in something and your whole face could get sucked into the machinery. Furthermore,  beards drain testosterone from your nads and blood from your brain, and,  as my mom used to say, beards are what escaped convicts grow to cover identifying facial scars.

It is always correct to despise a bearded man.  We should all face the future clean shaven.

Posted by bigcitylib at 8:30 AM 7 comments