...gives the Tories an 8 point edge nationally.  This can be won back, but given the CPC's $ advantage pre-campaign, I wouldn't be surprised if it holds up until the writ drops and its worth the LPC  returning fire with advertising of their own.  And when I say it can be won back, that is not to say it will. When the election is called the score is reset and it all comes down to one month where everyone gets equal time on the television, and all that money LPC supporters have been giving the party over the past four years fuels a very bonfire of ad spending, back-slapping and baby kissing from sea to shining sea.  And in the end, we will find glory here on Earth, or drink with our  ancestors again in the halls of Valhalla.

So the CPC would counter Justin's marijuana legalization position by running a crack smoker?  Hard to imagine.  But we can always hope.

Posted by bigcitylib at 3:31 PM 3 comments

If you can't vote Liberal, vote for someone else?  That's his message?  Not: we're Liberal and we've got great, progressive ideas?  No!  It's:  WE'RE LAME!  KICK OUR ASS!  PLEASE!  BETTER YET: KILL US! WE'RE TIRED OF THE WHOLE FUCKING TAWDRY SPECTACLE!!!  And that's the kind of message that gets your party mentioned in paragraph 19 of a 22 paragraph story.

Posted by bigcitylib at 1:46 PM 0 comments


@a_picazo @davecournoyer This is same guy had to deny he defaced his own signs to read "penis" for "denis".  Rather poor luck this campaign.
— Bigcitylib (@Bigcitylib2) April 25, 2015

Just to come clean here.  I thought the Prentice budget was an honest attempt by Albertans to enter the modern world of governance.  But it went over like a drowning duck off the top of Niagara Falls.  But whatever.  I hate Alberta the way everyone else in Canada hates Toronto.  So let Chaos reign!  Either the NDP or WRP rule OK by me.

Posted by bigcitylib at 5:22 PM 3 comments


They've bought space during some of  tonight's hockey games, apparently.  Probably for just a night or two, and then they'll hope The Net spreads word a bit further.  They'll get good media coverage out of it.  It's clever and positive and on point.  Just one shot in the battle, but nicely aimed.

Posted by bigcitylib at 8:35 PM 4 comments

As you may know, Nanos does internal ballot tracking every week. Based on the four week rolling average, the Liberals are at 34 per cent, the Conservatives at 29 per cent, the NDP at 25 per cent, the Greens at eight per cent and the BQ at four per cent. Please take note of the bonus chart in this specific release. Ballot preferences are part of the Nanos Party Power Index weekly tracking study.

Someone be sure to tell this guy.  He the nervous nelly-est of them all these days.

Of course the budget's just come out; the gov should get a positive bump out of that.  But it's all about positioning, baby.  And the LPC is positioned not goddamn bad if I do say so myself.  Not goddamn bad at all.

Posted by bigcitylib at 9:08 PM 5 comments

The decision is here.  Put briefly, the case will now get bounced back down to the Ontario ERT, where Ostrander Point Wind Energy will have a chance to convince the tribunal that their proposed remedy, a series of fences and gates that will block public access to the roads around the wind-farm, are enough to prevent "irreversible" harm to the local population of endangered turtles.

Some background can be found here, here, and here.

Posted by bigcitylib at 6:36 AM 0 comments

Since Patrick Brown looks set to become PCPO leader, its good to start looking for sources of intel on him now.  The Brown Retort has material on the PC MP that I hadn't heard.  From the latest post (a couple of months old now):

In a photo submitted to The Brown Retort...a criminally convicted supporter of Barrie MP Patrick Brown, is pictured at the opening of Brown's provincial leadership campaign headquarters in Brampton.

Good to get in on the ground floor, so when Oppo Leader Brown goes up in flames like an oily bag full of greasy rags, you can say: "I helped do that."

Even the pollsters involved don't quite buy it.  And they are using "google surveys" to compile their results, so make of that what you will.

As an aside, sure he's wildrose but I've met Derek Fildebrandt once or twice and he seems a decent enough fellow.

Posted by bigcitylib at 6:52 AM 2 comments

What's Going On In Alberta (Federally)?

From that EKOS poll: 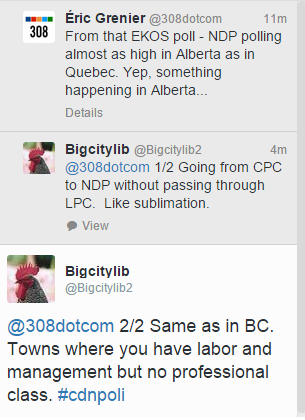 And of course we pros form the base of the Liberal Party.  Lawyers, doctors, hit-men (and women!), dentists, Real Estate Agents, private security specialists,  Where the local culture is not rich enough to support a large professional class, the LPC does poorly.

Posted by bigcitylib at 4:49 PM 2 comments

Email ThisBlogThis!Share to TwitterShare to FacebookShare to Pinterest
Labels: Alberta and The NDP, Professionals and Professionalism.

I remember serious rumblings 2-3 years ago that PM management wanted to turn the Post into a tabloid. One of the hurdles, of course, would have been that Canada already has a chain of urban tabs....

But what if you made the Post a tab and used whoever is left from the Suns in each market (a skeleton crew of a couple editors and maybe half a dozen writers) to fill the local news and sports pages within the Post?

With the TO Sun staff being moved into a broom closet at the Post building by the end of the year, that would make a lot of sense.

Other rumors have 333 being turned into a radical mosque slash paintball facility, and have The Post building down to one set of bathrooms for the entire staff to save money.  Employees have been asked to bring their own toilet paper.  Some have taken to crapping out open windows so as to avoid the interminable line-ups.

Update:  The first rumor is in fact fact.

Posted by bigcitylib at 6:05 AM 0 comments

Gruending On Canada's Role In The War Against The Islamic State

Despite the warrior rhetoric from some of our politicians, Canada is not a robust military power. We do, however, have experience and credibility —  although it has been diminished recently — in diplomacy, humanitarian assistance and the resettlement of refugees.

There's about 26 or 27 nations in the anti-ISIS coalition, and about half of them are dropping bombs. IMHO Canada would be more useful to what is clearly going to be a multi-generational conflict by being one of the coalition members not currently dropping bombs.  There will be lots of roles to play in the years and yes decades ahead.

Posted by bigcitylib at 9:42 PM 1 comments

Is Ezra Pulling Down His Duffy Interviews?

This fellow thinks he did:

I was skeptical, so I asked:

The interview he's talking about concerned the CBSC (Canadian Broadcast Standards Council), which Ezra typically had issues with because he lacks standards.

It's in late January of 2012 when Ezra begins to work Ms. Krause' research into his Sun News diatribes.  During that same month his astroturf group launches its "Our Decision" website, speaheading a campaign to "expose the foreign lobby groups working to sabotage and paralyze the hearings into the proposed Northern Gateway pipeline".  There is talk of "helping" Ms. Krause, though she has claimed to have received no money from them:


Who? Ezra Levant as well as the folks behind http://t.co/lsIlNluaii They obviously used my work but I was never paid a cent. @BrettMineer
— Vivian Krause (@FairQuestions) November 19, 2014

...for costs brought about by losing the defamation case brought against him by Khurrum Awan:

Meanwhile, some interesting bits of info emerged from the Duffy trial.  One is this daily itinerary for
February 8, 2010:

A meeting for pizza with Ez and the PM's wife.  Also this:

It's run by Saddam's old gang from the Baath party.  The best bit:

Rayburn questions whether even some of the foreign volunteers realise the extent to which they are being drawn into Iraq’s morass. Some of the fiercest battles being waged today in Iraq are for control of communities and neighborhoods that have been hotly contested among Iraqis for years, before the extremists appeared.

“You have fighters coming from across the globe to fight these local political battles that the global jihad can’t possibly have a stake in.”

Speaking of Old Saddam, he's looking downright gentlemanly these days.  My tribute to him can be found here.

Posted by bigcitylib at 1:08 PM 2 comments

CPC MP James Lunney has quit the party so as to more freely pursue and elaborate his own theory of biological change.  He spoke in the HOC yesterday afternoon, but was rudely cut off before he could fully state his beliefs.  However, an opposition "source" found the full text of his presentation in a trash-can outside the East wing.   I have reproduced some excerpts below:

The wheel of Ezekial was in fact a UFO, which brought the dinosaurs to Earth, including Stegron and Barney. Also, Ezekial was  called "Easy" by his friends.  Not many people know this.

The Id forms the very ground for the SuperEgo, always and everywhere permeating the structure of it.  Oops.  That's Freud.  Wrong theory.

There is no theory of evolution.  There are only the animals that Chuck Norris has allowed to survive.

The lower back supports the spinal column and brain-case.  It also supports the chiropractor.  But I am rambling now.

When the End Times come, and they are coming, those who scoff will find themselves swept into a lake of burning fire, while believers ascend to Heaven and a life of infinite happiness.  Personally, I look forward to playing ping-pong with Jimi Hendrix.

So there you have it.  Our government appears to have lost a thinker of the highest order.

Posted by bigcitylib at 6:30 AM 4 comments

Takes them until par 8 to finally, grudgingly admit that the LPC is still slightly ahead:

The Liberals under Mr. Trudeau were the first or leaning choice for 34 per cent of the survey’s respondents, compared to 31 per cent who said they would or would likely vote Conservative and only 23 per cent who favoured the NDP, the poll found.

Instead they prefer to spend a ton of ink talking about how Mulcair's fortunes have improved without much moving the gauge on the horse-race question.  Which is sort of like losing, but winning a moral victory.  Which means losing.

Posted by bigcitylib at 9:15 PM 0 comments