Smart Or Stupid? (Mulcair And The Debates)

Mulcair is threatening to pull out of any debate that Harper ain't at.  Already, a tide of outrage is rising on twitter.  Democracy is being defiled!!! and so forth.  Mulcair would be wise to ignore it. Catering to that tiny sliver of the nation's citizenry  who are immersed in its federal politics is profitless.  Its like trying to service a few thousand high maintenance girlfriends. Exhausting, and a money sucker.  So how will this play to the wider audience of the unwashed and apathetic?   That is, the target audience?  Well, probably not badly.  Mulcair wants to be Prime Minister, not one of the also-rans.  So why waste time arguing with losers over scraps? Fight the guy you're out to replace!  That's the thinking behind the move, as far as I can figure it.  So: smart or stupid?  Right now I'd file it as dirty but effective. As for the LPC response, well I hope it doesn't involve whining about how unfair life is.

Email ThisBlogThis!Share to TwitterShare to FacebookShare to Pinterest
Labels: 2015 Federal Election, Mulcair and The Debates

A Short Note On A Long Election

This has risks for all parties.  The risks for the 2nd and 3rd parties are obvious.  They might run out of dough.  But it also has a downside for the CPC.  More is not always better when it comes to bombarding the airwaves with attack ads.  Once you've reached the saturation point you're just wasting money  And, remember, these guys are terrible when they don't have a script.  Now they have twice as much script to write, and airheads like Kory Teneycke are going to be the auteurs.

Posted by bigcitylib at 9:20 PM 1 comments

There are tens of thousands of inactive lawyers like me in Canada. They include politicians like Peter MacKay and Thomas Mulcair. Sometimes these politician-lawyers are polite. Sometimes they aren’t. Two years ago, my fellow member of the Law Society of Alberta, an opposition politician named Rachel Notley, compared the Alberta Energy Regulator to a “banana republic”. It’s a quasi-judicial tribunal, like the human rights commission. But it’s unthinkable that the Law Society would have prosecuted her for being “discourteous” to a government agency. Because we live in a democracy and value public debate.

A rebuttal from the proceeding transcripts:

And on Ezra's various misrepresentations:

For example Ezra claimed that Mr. Chak was a "Muslim immigrant ":

And finally, my favorite bit from the decision:

If I can I will upload the entire document later.

And later is now now.

Posted by bigcitylib at 5:55 AM 1 comments

Ezra Meets The Truth, Lies To Its Face

Ezra's back in Dutch with the Alberta Law Society for an alleged breach of their professional standards.  He writes in his own defense:

To my knowledge the decision to prosecute me is unprecedented. ...I’m not even a practicing lawyer. I’m a journalist who happens to be trained in the law.

Well, no, this is not the case.  From the proceedings of his appeal, some words from R. Sharma on behalf of the complaintant:

I think he's referring to Lund V. Boissoin, which wound up in 2012.

Posted by bigcitylib at 8:43 AM 6 comments

The Golden Age Of Rock & Roll


The world should have ended the next morning.  There was really nothing left to say, rock & roll wise.

Posted by bigcitylib at 8:04 PM 0 comments

It Begins...(The Death Of Rebel Media)

Posted by bigcitylib at 6:03 AM 3 comments

Email ThisBlogThis!Share to TwitterShare to FacebookShare to Pinterest
Labels: The Death Of Rebel Media

Life In Scarborough: The Great Scarborough Storm Of July, 2015--An Eye Witness Account!!

I was sitting in my favorite workin' man's pub in The Scar when it hit!  Sideways rain, hail, patio umbrellas falling over!  The works! Total fuckin' Apocalypse!

Later, making my way South down Markham road through the wreckage, I saw this! 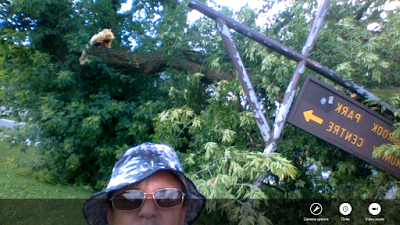 This isn't the tree that fell at Lawrence and Scarborough Golf Club Road that everyone's talking about.  No!  This is ANOTHER TREE!  In a POORER PART OF SCARBOROUGH that the Media Party pays no attention to.  BUT TREES STILL FALL HERE!  whether the CBC or anyone else cares or not!

And I actually sat down at the bus shelter that this tree had fallen on top of, and I could hear ominous creeking and cracking noises.  This sucker could give way any time!  And its laying across live wires, so innocent bus riders underneath could get crushed and electrocuted all at once!  OMG!!!  OMG!!!  OMG!!!

But we're tough out here in The Scar, which we also call The Bro (for reasons I won't elucidate at the moment).  We'll come back from this!  We will rise again!!!

PS.   That's me in the picture.  I've got a few shots without, but it provides scale (my head is about nine inches wide) and my wife said I looked sexxxy.

I wrote about this back in May.  I said:

So there's an T.O. East End Newspaper called Your Ward News.  From what I gather its mostly a direct mail affair; the publisher, a guy named Leroy St. Germaine, has Canada Post deliver it to folks down in Ward 31 (The Beaches).  It has apparently always been a bit flaky/racist, but the last couple of issues have seen a guy named James Sears gradually taking over, until recently he was appointed "Editor in Chief". And he has taken the publication "Full Nazi": articles promoting holocaust denial by old Heritage Front members; articles praising Adolf Hitler; articles promoting "white pride". The works.

Your Ward has published a few more issues since then, and it remains nasty stuff.  You can go look through the links above if you want; or you can read this post by WK, which shows a few of the worst bits.  One thing that's changed, though, is the space devoted to ads.  May had over two pages of color ads and two more pages of classifieds.  This issue is down to one page of color ads and no classifieds.  So the campaign a number of people have undertaken to contact advertisers and inform them of the paper's contents seems to have paid off.  In fact it appears that some of the remaining advertisers are there against their will: 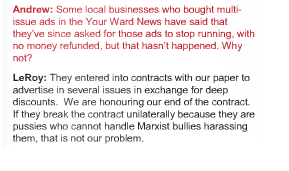 Some progress at least, then, even if Canada Post is still carrying the thing.  I find it hard to believe that lawyers have told them it doesn't contain hate-speech.

Posted by bigcitylib at 6:23 PM 1 comments

A stub of a story here:

A report by a Mi’kmaq scholar denounces the controversial Mother Canada statue.
The statue is part of a war memorial proposed for a national part in Cape Breton, N.S.
Critics say the statue will pave over a pristine part of the Cape Breton Highlands.
The Mi’kmaq say it will also pave over Aboriginal rights and title.

The full study here.  From it:

If the proposed Mother Canada development were to proceed, any future use of the area and any future exercise of any Aboriginal and Treaty Rights by the L’nu would be extinguished. This would have a tremendous impact on the aboriginal and treaty right of the L’nu to hunting, fishing, gathering of medicines and practicing their culture in a place that is clearly significant both culturally and spiritually for the L’nuk.

And my favorite bit:

• If the project is to proceed, a starting point in accommodating the concerns of the L’nuk people would be to change the design of the Mother Canada statue. Most L’nuk would see the current design as an image of an oversize, dominant Catholic nun. Given the recent release of the Truth & Reconciliation report, the design needs to be reexamined so as not to remind L’nu’s of the cultural genocide and rampant abuse practiced at the Shubenacadie Residential School.

I find Ms. Young's level of expertise hard to assess, but if there really are legal issues with local FNs to be settled before this thing can proceed, I would think that its future is not bright.

Posted by bigcitylib at 7:00 PM 0 comments

Countdown To Her Grovelling Apology

Posted by bigcitylib at 6:15 PM 0 comments

Was hanging around downtown today, and I will say that South American women really really know how to stuff a tight t-shirt.  That is all.

Posted by bigcitylib at 7:04 PM 0 comments

The CPoC War Room, or: Did Kory Teneycke Strike Again? 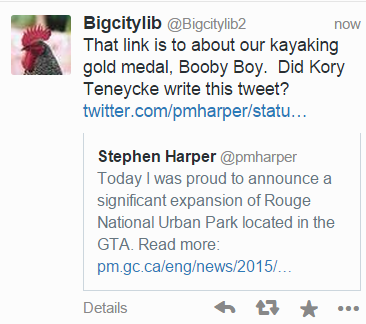 Posted by bigcitylib at 4:12 PM 0 comments

I think this graphic (which looks much better when you click on it) puts the whole "Mother Canada" statue debate in its proper perspective.

Posted by bigcitylib at 3:07 PM 0 comments

No word of a lie, two of my biggest child-hood heroes were Bill Cosby and Woody Allen.  In grade four my teacher played an  LP of Cosby's stand-up routine on the last day before summer break because  he had nothing more to teach us and it kept us quiet.  That's what got me into him; I think it was The Chickenheart story.  So I bought a copy of "To Russell, My Brother, Whom I Slept With" a week later (I was nine), and within a year I had collected all his LPs. Woody Allen of course I knew from his early movies, and later his New Yorker pieces.  He did stand-up a  bit as well, and I collected one or two of his albums, but it was never his thing.

They were, I thought at the time, the two funniest men who ever lived.  I still think that.  And Cosby's racial philosophy was intriguing.  And Allen once wrote the truest thing anyone has ever said about the world of post-secondary education: "Don't take anything where they make you read Beowulf."

But of course over the years it's been revealed that both of these men are monsters.  This is a little harder to process with Woody.  Cosby hasn't done anything in decades.  All the best bits of The Cosby Show were recycled from his stand-up routines.  The show's ideology didn't bother me so much as the fact that I could see most of the jokes coming.  But Woody still produces the occasional masterpiece.  Boycotting him would mean not watching Blue Jasmine, and everyone should watch that movie.

Funny, though, how afterwards you keep running into things that make you think you should have suspected.  Here's Bill Cosby from 1969:

PS. Something  I forgot in the post is that, due to those records being played in school, Millstream Elementary's official game when I was in grade five and six became Buck Buck. We had several teams. And though there was no Fat Albert, we did have "Big Ben".  This is a little school on Vancouver Island back in 1973 or something.  Buncha little white kids, playing a game Bill Cosby had told us about playing during in the 40s and 50s in the Projects of Philadelphia.

Posted by bigcitylib at 8:17 AM 3 comments

Thar She Blows? Greece Seems To Be Voting No

If either Greece says no or Greece says yes, and Chinese stocks continue to tumble, expect negative to really negative growth for the remainder of 2015 and into 2016. Get out the old shot-gun, and be prepared to eat your boots for the extra calories.