DeSmog Blog has a guest post on the Energy East pipeline.  I am a huge fan of DeSmog, but I think this post is wrong-headed and ultimately counterproductive.  Because it is, at bottom, an a priori rejection of the project before it even goes through a newly revamped ie toughened NEB process that now explicitly considers "upstream emissions".  My view is if it goes through the process successfully then, in the absence of legal action by the First Nations along its route, it should be given federal approval.

Posted by bigcitylib at 8:27 AM 1 comments

So I finally pulled the plug on my '97 Cavalier yesterday afternoon.   I feel OK about it.  I'd put a new engine in last February and hoped this would squeeze a few more years out of the thing.  But it was like sewing a shiny fresh metal heart to a bunch of rusty old organs.  It shook them to bits with its vigor.  Everything ancillary has failed over the past six months.  I finally told Crappy Tire to pull the plug at noon on Sunday. and an hour later when I was driving by in my emergency rental I saw a tow-truck hauling it off to automobile heaven.  Bye bye old car!  I won't miss a CD -player where you had to open the trunk to change CDs.  I won't miss the pain in my guts from thinking that this drive might be the one where the car failed somewhere in the 905 area code, where rural primitives allegedly still raise "pigs" and "cows", and occasionally eat city folks whose cars have stalled.  My one regret is that I never managed to have sex in the car while it was being pulled through one of those automated car-washes.  I could have managed the timing (about two minutes), but the interior was too cramped to really get set up.  And it would have been better to have someone in the car with me.  But otherwise onward and upward!  A new previously owned vehicle is in my future!  This one may even have an MP3 player, or at least a working air-conditioner.

Posted by bigcitylib at 7:36 PM 1 comments

Email ThisBlogThis!Share to TwitterShare to FacebookShare to Pinterest
Labels: Cars, Life In Scarborough

Sure they're loud-mouthed cowboys.  Sure their cities are crap-holes where the streets all go one-way... to nowhere.  Sure their hockey teams have done fuck all for the nation over the last couple of decades.  Sure they boast about all the money they send East while at the same time grovelling for Ottawa infrastructure $s  because their tar-mines are all going TU.  Which indicates a distinct lack of couth.  Sure they  inflicted Ezra Levant on the county.  Sure they each own a spare gold-plated cowboy that they can melt down to pay the bills when times are tough.

But under Notley's NDP they have instituted a carbon tax. They're at least TRYING to act normal.  I say give 'em the one pipeline (which, after all, is there already and only in need of fiddling with to make the project work) and then tell 'em to go pound salt re the others and feel righteous about it.

Posted by bigcitylib at 4:53 PM 5 comments

Disgusting cartoon in Charlie Hebdo ("what would've become of Aylan had he grown up? A groper") via @faizaz pic.twitter.com/iB4myFb1ke
— Sunny Hundal (@sunny_hundal) January 13, 2016 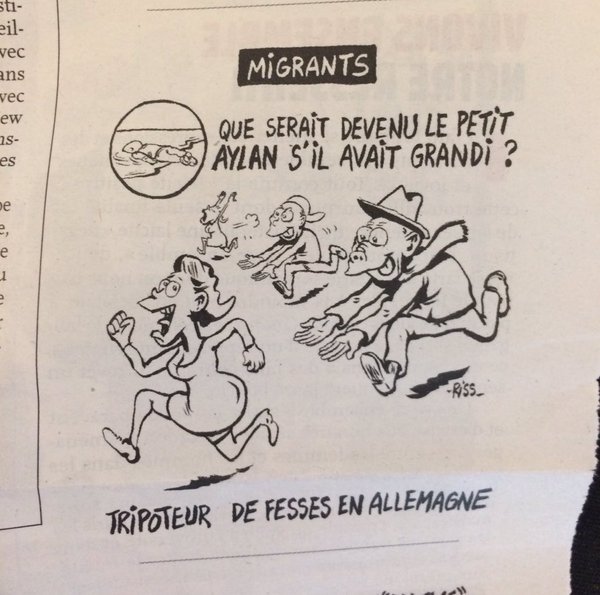 It actually makes sense if you think about it.  The rest of the field sure ain't making anyone's heart beat any faster.  This  may be the year of the crass rich guy, with strange/no hair.  And the funny thing is: it would make Rob Ford the most influential politician of the young millennium. Guys like Trump and (maybe eventual Prime Minister) O'Leary have surely studied him to see how far the limits could be stretched.  Rob Ford took the Overton Window and fucking ate it raw.  It's his world now; we just rent from him.

Posted by bigcitylib at 7:25 PM 2 comments

FPTP Or Not FPTP?

I don't mind the Cullen/Coyne option, where we adopt a new system, have one election under it to see how we like it, and then have a referendum, where going back to pure FPTP is one of the options.

Personally, I like better the idea of ratifying a newly chosen system via referendum before the next election, but where pure FPTP is not one of the options.  After all, the specific campaign promise was that the system would change from the status quo.  Into what was left open.

But thinking ahead a bit, I rather like the Scottish way,   Here some candidates are  elected via FPTP, with additional members chosen from lists compiled in advance by the parties.  Some, like Colby Cosh, find this undemocratic.  But regard the American example a moment; the POTUS can choose anyone for his cabinet; that's how he winds up with the best and brightest working for him.  Whereas in Canada whenever Conservatives in power you wind up with chiropractors running the Ministry of Science because they won a nomination in a safe riding.

So your "list" would be where you could keep your "star" candidates, the talented but not necessarily sociable.  There would be no reason anymore to parachute them into a hostile riding; no reason for them to pretend to like cod tongues or wear a cowboy hat at some stupid farm show.

Whether or not it has worked out like this in Scotland, I have no idea.  Finding out would require research.

Although I would note from this that some folk over there are still bitching.

Posted by bigcitylib at 9:14 AM 0 comments

I have written about Longos most permissive and excellent samples policy here.

The problem is they stop giving out samples sometime after 4 PM.  Yet people come in after 4 and there are NO SAMPLES and they are HUNGRY!!!  They might be walking around thinking HEY THAT LOOKS GOOD IF I JUST HAD A SAMPLE FOR VERIFICATION PURPOSES I JUST MIGHT buy IT!!!  Or they might be looking to stuff their faces.  But whatever.  THESE PEoPlle Are Hungary!!!!  So I think I've spotted a gap in Longo's business model.  So I'm going to tell them about it.  And in doing so I am NOT JUST MOOCHING!!  I am helping to perfect GLOBAL MOTHERFUCKING CAPITALISM!Of which whom among us does not love?

Posted by bigcitylib at 6:15 PM 3 comments