What I'm Up To

Wife and I are out on the West Coast for a wedding and some vacationing, which for us has come to be associated with visiting the many, many wineries on Vancouver Island.  This 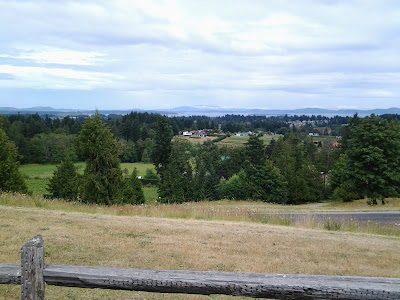 ...is a shot from outside of one of our favorites, de Vine Vineyards on top of Devine Hill.  And this 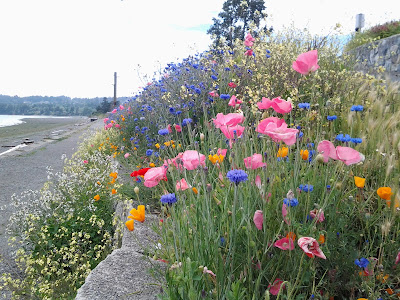 ...is just a random bunch of wildflowers outside of Sydney By The Sea, an old retirement town that's repurposed itself as a tourist trap.  Note how healthy these flowers look.  The same flowers in T.O. would be gagging on car exhaust and industrial pollutants.

Posted by bigcitylib at 9:39 PM 1 comments

Email ThisBlogThis!Share to TwitterShare to FacebookShare to Pinterest
Labels: On Vacation

Your Ward News: A Letter The G&M Didn't Print

They got an even shorter version, but so stubbornly persist in their wrongness and hatred of elegant prose that they wouldn't even print that one.  Anyway, I didn't want all my work to go for nothing, so here it is:

Gee suggests that Toronto citizens respond to Yourward News by  debunking its chief author, James Sears.  But Sears brags about the many women he has "pinned down against their will", and talks up Hitler and Jesus in the same breath.  That rape is bad, and Hitler not like Jesus; these seem self-evident truths and I would personally shun anyone who felt they were at issue.  An attempt to convince them towards sanity would likely prove futile.  It might also result in online death-threats from Neo-Nazis and members of the "seduction community", as some have already discovered.

And I'm not sure  Mr. Gee has read what he is defending.  He supports prohibiting material which incites violence, but  apparently missed  Sears' pro-rape musings and his talk of "eradicating FemiMarxists".  I don't begrudge Mr. Gee his ignorance, but he might show some empathy for the posties who must deliver this vile product, or the locals who receive it on their doorstep.  They can't avoid it so easily.

Other than maybe this, for now.  THERE IS MORE!

Posted by bigcitylib at 6:49 PM 1 comments

The guy's in construction.  He's management.

Posted by bigcitylib at 1:11 PM 1 comments

Email ThisBlogThis!Share to TwitterShare to FacebookShare to Pinterest
Labels: Life In Scarborough

The Odds Of Me Voting NDP Just Went Down

I admit they they weren't high to begin with.  But IMHO Nathan Cullen was one of their most charismatic, sharpest MPs, and if he ever grew some hair on that bald head I think he could have led the NDP, if not to power, than at least to one or two levels above the level of haplessness which they now occupy.  And I'm a bit surprised at his decision.  Maybe Nate figures its not worth running for Leader o'  the Losers.  I hear the offices they stick the 3rd party in have roach and rat infestations, depending on the season, and the cafeteria serves moldy bread, and all the taps drip.

But if Nathan Cullen ever wants to floor cross, he should just slip me an email.  I know a couple of LPC heavyweights, and I donated $5 to the party one time.  I might be able to pull a few strings and get him a ministry.  Something small.  "Minister of String, Cans, And Jars"; something like that.  The rest is up to him.  Work hard and he could get ahead.

Posted by bigcitylib at 3:34 PM 2 comments

Mann Vs. Steyn: Who Is The Dead Denier?

Mark Steyn is complaining that the defamation case launched against him by climate scientist Mike Mann has taken forever.  Well, on the face of it, the first response must be that he should suck it up. In Canada, at least, waiting four years for a defamation case to unfold is pretty standard;  I doubt the U.S. court system is significantly less clogged.  And of course much of the delay is a result Mark's various stalling tactics after the initial judgements went against him, tactics which included the promotion of arguments so novel as to be, as they say, "unknown to law".

Also, there's this from his request for an expedited hearing:

Many of Steyn's expert witnesses are emeritus professors and comparatively advanced in years, being of an age and eminence that enables them to stand against the bullying and intimidation that prevails in climate science. Therefore, the passage of time is not an unimportant thing. Indeed, one of Steyn's proposed witnesses has, in fact, died while this interlocutory appeal has been with the appellate court.

I've been trying to figure out who the old dead scientist might be.  Maybe Bob Carter or Bill Gray. If anyone knows for sure, please say in the comments. In any case, Steyn only confirms what John Mashey showed several years back, which is that deniers with scientific credentials tend to skew towards the elderly end of the demographic scale.

Finally, you don't have to read Mark's brief if you don't want to, but it sounds as though he wrote it himself, or took a draft from his lawyer and spiced it up with Steyn-style rhetorical flourishes.  Its best to look at it as a fund-raising tool more than a legal document.  And its worth noting that judges typically don't approve when you use the legal system to win in the court of public opinion. Sometimes they make this fact known in their judgements against you.

Posted by bigcitylib at 8:32 AM 3 comments