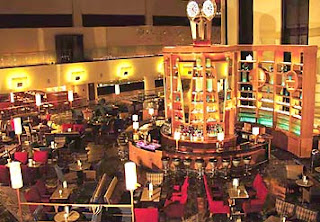 Organized by The Heartland Institute, the 2008 International Conference on Climate Change will gather
...hundreds of the world's leading scientists, economists, and policy analysts...to explore key issues overlooked by advocates of the theory of man-made global warming.
Obviously,
Depending on the answers to even a few of these questions, the entire scientific or economic case for taking action to "stop global warming" collapses.
And just to give you a taste of the alternative consensus these boys have developed:
Their findings suggest that the Modern Warming is moderate and partly or even mostly a natural recovery from the Little Ice Age; that the consequences of moderate warming are positive for humanity and wildlife; that predictions of future warming are wildly unreliable; that the costs of trying to "stop global warming" exceed hypothetical benefits by a factor of ten or more; and more.
In other words, it isn't happening, and if it is happening its good and there's nothing can be done about it anyway.
But wait, there's more!
Actual surveys of climate scientists and recent reviews of the scholarly literature both show that the so-called "skeptics" may actually be in the majority of the climate science community.
Topics of discussion aside, there's no question that the Heartland Institute has arranged some swell digs for conference participants.
A block of rooms has been reserved at the Marriott New York Marquis Times Square Hotel, 1535 Broadway, New York, NY. A special conference rate of $269 plus tax double or single is available to people registered to attend this conference.
They're going to be right on Broadway, in a hotel that has no less than two bars (see pic above), two restaurants, a Starbucks and a Sushi bar. These guys will be denying in style, that's for sure! How much did Exxon clear last quarter?

No word yet on speakers or special events, but one insider rumor has it that Tim Ball himself will be conducting a nightly tour of New York City strip clubs. Apparently, the job fell to him because, being a Canadian, there's nothing NYC can throw at him that he hasn't seen before (there's none of those silly g-strings up here in the Great White North, Yanqui Luzers).
This will be a good one to keep an eye on. The Heartland is shooting for an audience of elected officials, journalists and business leaders as much as scientists. It will be interesting to see if any beyond the same old same old (Ball, Gray, Monckton, and etc.) show up. Will any real scientists be willing to see their reputation self-immolate by appearing before this crowd, no matter how wonderful the hotel finger-foods?


One would think that countries that signed the Kyoto treaty are doing a better job of curtailing carbon emissions. One would also think that the United States, the only country that does not even intend to sign, keeps on emitting carbon dioxide at growth levels much higher than those who signed.


And one would be wrong.


The Kyoto treaty was agreed upon in late 1997 and countries started signing and ratifying it in 1998. A list of countries and their carbon dioxide emissions due to consumption of fossil fuels is available from the U.S. government. If we look at that data and compare 2004 (latest year for which data is available) to 1997 (last year before the Kyoto treaty was signed), we find the following.

"Britain is responsible for hundreds of millions more tonnes of greenhouse gas emissions than official figures admit, according to a new report that undermines UK claims to lead the world on action against global warming. The analysis says pollution from aviation, shipping, overseas trade and tourism, which are not measured in the official figures, means that UK carbon consumption has risen significantly over the past decade, and that the government's claims to have tackled global warming are an "illusion".

The report, from a team of economists led by Dieter Helm at Oxford University, could prove embarrassing for British negotiators at the UN climate summit in Bali, where they are trying to persuade countries including the US and China to agree a new worldwide treaty to limit the effects of global warming.

Britain is seen as a main player as the talks enter their second week, partly because it is one of few countries on track to reduce its emissions as required under the Kyoto protocol, the existing global plan to curb carbon emissions. Ministers are due to arrive for the high-level segment of the talks on Wednesday. By Friday, they aim to agree a road map and timetable for a treaty to succeed Kyoto in 2012.

Under Kyoto, Britain must reduce its greenhouse gas output to 12.5% below 1990 levels by 2012. According to official figures filed with the UN, Britain's emissions are currently down 15% compared with 1990. But the new report says UK carbon output has actually risen by 19% over that period, once the missing emissions are included in the figures. The report says: "This is a dramatic reversal of fortune. It merits an immediate, more detailed and more robust assessment. It suggests that the decline in greenhouse gas emissions from the UK economy may have been to a considerable degree an illusion."

Don't they teach "sourcing" in Alberta?

I can't wait to see hoe the conference in New York goes.

I can't wait to see how they pick apart the IPCC and show how the U.N is a leftist organization trying to suck money from the richest countries to give to the poorest.

The IPCC has already been proven by the British House of Lords to have lied about how they gather the evidence.

It's time Harper called a committee to look at the real science behind the IPCC.

It's time the IPCC is proven to be a corrupt, bureaucratic organization that it really is.

Come on Harper, bring on the true science.

Notice it's called "Heartland" - the name for the south in the US - where the rich oil companies do business.

Wow! It almost looks like they're willing to spend as much money - but not quite - as the 'believers' who jetset around the world, staying in exotic and expensive locations. Too bad Big Oil doesn't give them as much money as Big Carbon gives the warmocaust supporters.

nail this to your WARMonger Church door


As much of the U.S. is being blasted by vicious ice storms, a blockbuster report published in a prestigious scientific journal insists that the evidence shows that climate warming is both natural and unstoppable and that carbon dioxide (CO2) is not a pollutant.


The conclusion is that climate change is "unstoppable" and cannot be affected or modified by controlling the emission of greenhouse gases, such as CO2, as is proposed in current legislation.


According to Dr. Douglass: “The observed pattern of warming, comparing surface and atmospheric temperature trends, does not show the characteristic fingerprint associated with greenhouse warming. The inescapable conclusion is that the human contribution is not significant and that observed increases in carbon dioxide and other greenhouse gases make only a negligible contribution to climate warming.”


One of his co-authors, Dr. John Christy, added: “Satellite data and independent balloon data agree that atmospheric warming trends do not exceed those of the surface. Greenhouse models, on the other hand, demand that atmospheric trend values be 2-3 times greater.


"We have good reason, therefore, to believe that current climate models greatly overestimate the effects of greenhouse gases. Satellite observations suggest that GH models ignore negative feedbacks, produced by clouds and by water vapor, that diminish the warming effects of carbon dioxide.”


And the third co-author, Dr. S. Fred Singer, said: “The current warming trend is simply part of a natural cycle of climate warming and cooling that has been seen in ice cores, deep-sea sediments, stalagmites, etc., and published in hundreds of papers in peer-reviewed journals.


"The mechanism for producing such cyclical climate changes is still under discussion; but they are most likely caused by variations in the solar wind and associated magnetic fields that affect the flux of cosmic rays incident on the earth’s atmosphere.


"In turn, such cosmic rays are believed to influence cloudiness and thereby control the amount of sunlight reaching the earth’s surface­ and thus the climate.


"Our research demonstrates that the ongoing rise of atmospheric CO2 has only a minor influence on climate change. We must conclude, therefore, that attempts to control CO2 emissions are ineffective and pointless — but very costly."
_________________________

NewsMax? Why the hell are you trusting the evil liberal media, anony?

You know, it's funny how politicians like Gore, Chretien, Dion all insist that mankind is responsible for GW, yet non-U.N. non-IPCC climatologists seem to think that man is not responsible.

bigcitylib said...
This comment has been removed by the author.
1:28 PM

The IPCC scientists are all volounteers, so they are essentially ALL "non-U.N." in that they are not employed by the U.N.

No mention of the 15,000 people that jetted to Bali spewing carbon on taxpayer paid for jet flights?

But some other people put a conference together in NYC and you are all over it, simply cuz you don't agree with their views.

I heard on CBC that they big party at Bali didn't even meet any goals they set out.

what a wanking biased bunch of hypocrites, you especially

Well obviously they'll have no credibility unless they can get some rock stars, pop stars, movie stars, and glitterati on their side. Scientists? Who needs 'em.

Most of these pole-smokers are too lazy to write real papers. Look at how they put crap in EE, don't even do footnotes, write papers at the last minute on used toilet paper using crayons.

There are a few like Landsea, Christie, Zorita that I respect. They write real papers in real journals. The rest of them are just playing internet blog games for audiences even dopier than they are.

I recently came across your blog and have been reading along. I thought I would leave my first comment. I don't know what to say except that I have enjoyed reading. Nice blog. I will keep visiting this blog very often.