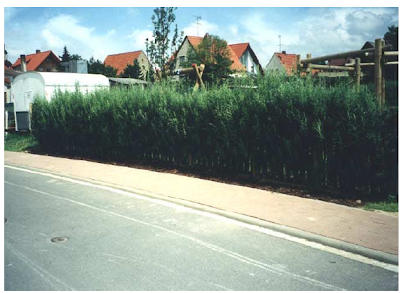 Down the hall from Loonie Lake in the Toronto media centre, taxpayers are being hit up yet again, this time for something called “The Living Wall.”

Summit organizers are contracting a massive wall of pre-cultivated plants that come with their own irrigation system.

This, we are told in government documents, will be the G20 summit’s “signature environmental project.”

(Speaking of legacy, Toronto taxpayers will have to take care of this vertical flowerbed for the next century).

How much The Living Wall will end up costing Canadian taxpayers is anyone’s guess.

With two weeks to go before the structure has to be in full bloom, the summit management office sent us a note saying it still had no cost estimates for the project.

Likely translation: The bill for this thing is too outrageous for publication.

Actually, Living Wall is a T.O.based company. That's a picture of one of their product at the top of the post (there' a wood frame under the foliage). And while the "pricing" section of their website says "coming soon...", we can find preliminary cost info in one of the company brochures: 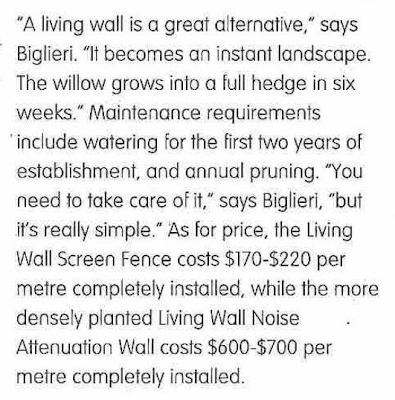 Don't know how long this fence is supposed to be, and I'm a bit unsure as whether Living Wall is is actually building the living wall (the project was put out to tender), but we can safely put its cost well into the $10,000s, I think.

I will leave it to my readers to decide whether the cost is worth it.

Posted by bigcitylib at 7:03 AM

It's probably to make Toronto look prettier. You know, image and all.

This, we are told in government documents, will be the G20 summit’s “signature environmental project.”

This is probably one of the saddest things that could be said about the whole thing. I'm not against the idea of a living wall, but to have it as sort of the peak of your environmental project is depressing.

"...we are told in government documents, will be the G20 summit’s “signature environmental project.”

Oh, look everyone!
We planted shrubbery!!!

Yup, Canada is a model for the world on environmental policy, taking up the cause from where the former Soviet Union left it.

The problem, however, is we have so emboldened protestors that it's become an international sport.

It's like we almost welcome it as an expected part of international conferences.

Is there any doubt that, if left alone, protestors would be breaking into meeting rooms, or, perhaps, worse?

If governments would get back to being about representing their citizens fairly rather than being about political ideology, then chances are we'd have a lot less protesting going on.

The issue is not the protesters, but rather the fact that governments are grossly out of touch with the people they allegedly represent.

WTF are you talking about Rob? The topic is an overpriced fence, fake lakes for imaginary journalists and blatant pork-barelling. Keep up.

Or are you suggesting that a living wall is the only way to keep the hippies out? What is this? Lord of the Rings?

Is there any doubt that, if left alone, protestors would be breaking into meeting rooms, or, perhaps, worse?

You're right. Not even the living wall would be safe with them. :)

There is a bit of the mob mentality about protests, but they aren't always violent, as in the J26 protests in Calgary. Before we tar the protests, we should also keep in mind that the violence in these protests have come from the police as in London and Italy.

In Rob's defense MgS - there are a bunch of Anarchists out there who protest and vandalize property just for shits and giggles - and these G8/G20 meetings are a magnet.

Mr Harvie, you're one of the few thoughtful conservatives who comment on these Liblogs - you can't possibly be happy with this rape of the taxpayer's wallet. This goes beyond partisan politics with me, I for one am truly pissed with this.

It's all clear now - the Knights who say "Ni" must be appeased!

T of KW.. I was just going to chime in, and I have before.

The expense is ludicrous. Happy "lake side" media sets, etc., etc., during a time of restraint is ridiculous. Further -the reality is that much of this is a coddling of the sort of financial elite that have given us the recent "Nightmare on Wall Street".

If someone asked me, I'd say, set them all up on some remote high-end fishing lodge - then they can have all the security they want at a fraction of the cost..

In any event - the suggestion that we can "showcase" Toronto would be akin to "showcasing" the BP Oilspill.

You can put a bow on a pig, but it will still be a pig.

sharonapple88 said...
This comment has been removed by the author.
7:06 PM

In any event - the suggestion that we can "showcase" Toronto would be akin to "showcasing" the BP Oilspill.

You can put a bow on a pig, but it will still be a pig.

Anyway, they're not in Toronto so as to showcase the city. Apparently, Muskoka would have been overwhelmed with having to lodge 20 world leaders and their minions.

It`s basically a living hurdle fence. Willows are not hard to grow and will find their own water without much help. Anybody who has had a slight drip in their sewer will testify to this.
I`m at a loss as to why the costs are so high though. Two folk could install this pretty efficiently and willows are amazingly easy to propagate.
Cut a bit off, remembering which way was up and which way was down and put in a bucket of water.
When roots show pot on.
My wife creates about 50 new willows each year to give to friends on acreages.