Bernie Farber's new column for the CJN is now on-line.  Its about the crummy manner in which the Canadian government has treated the Pusemas, a family of Hungarian refugees which includes a six year old girl named Lulu.  What I'm particularly interested in is this bit: 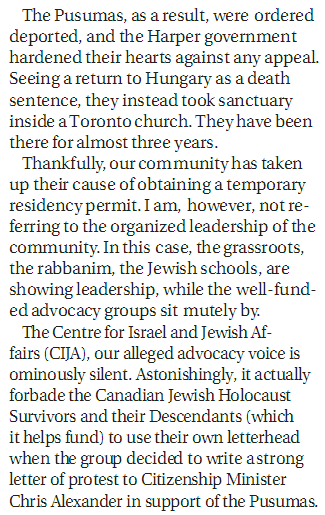 Lets be clear: CIJA is financially muscling a group of holocaust survivors for protesting the behavior of the current government.  Why?  Well: 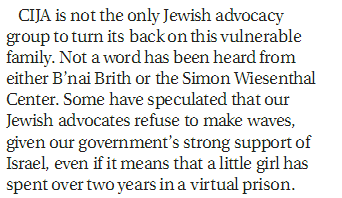 Of course this is only speculation.  But if so, CIJA and these other organizations have transformed themselves into a single issue advocacy groups, trading their ability to speak out generally for a single paltry policy stance from the current government.

Since the Canadian Jewish Holocaust Survivors wrote their letter regardless, it appears that all CIJA et al have managed to accomplish is to muzzle themselves.