Is Rural Seperatist Behind Tory Rebs? 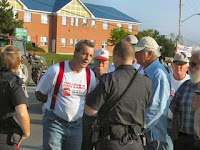 John Tory should look to a controversial rural rights group with close ties to one of his MPPs if he's lying awake at night wondering why his support at a weekend leadership review convention was lower than expected.

I knew Randy Hillier would come in handy one day.

Ladies and gentlemen, the next Provincial Conservative Party leader, red suspenders and all.

Posted by bigcitylib at 9:33 AM

Whooee! Hillier woulda been less dangerous to Tory if he wasn't allowed to run as a PC. Tory's all against "lawlessness" when it comes to Native blockades and the Caledonia issue but he still signed Hillier's nomination papers. He's only got himself to blame.

I don't think Hillier could really mount a challenge to Tory. He can be a major embarrassment and thorn in his side but the PC's aren't that stoopid.

You can't see it, but he's also wearing handcuffs in that little photo.

Wingnuts of the same feather stick together...

"Meanwhile, there’s a smell like the fertilizer from farmer’s fields coming out of Queen’s Park. Some would say, things have never smelled more refreshing."

Based on the Catch-22 "Major Major" precedent, IMHO the job ought to be Tory's for as long as he wants it.