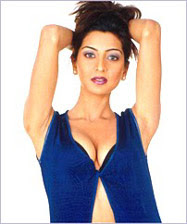 The Mississauga East-Cooksville Conservative Party executive have a problem. Bi-lingual, well-travelled, tv host Melissa Bhagat is willing to run for them, but they're not sure they want her:

February 22, 2008 12:28 PM - Nine directors of the Mississauga East-Cooksville Conservative Party executive have resigned in protest over the hasty process used by party leaders to select their riding's candidate in the next federal election.

One of the nine party Rebs, Charles W. Conn, has gone public with his issues re Ms. Bhagat, and frankly they seem to run a bit deeper than mere process:

Inflicting us with a Party-selected candidate who has been rejected by the Liberals, both provincially in Brampton Centre and federally in Brampton Springdale, and who was not welcomed by the PC's provincially, is an invitation to disaster. Doing so, so soon after the Tory rape of Mississauga South in the recent provo election, where the PC's inflicted Liberal-reject Peterson on the EDA, will confirm that the Tory brand stands for top-down dictatorship and callous contempt for members and citizens in Mississauga. It will also ensure continued victories for Liberals in Mississauga for years to come.

MEC members deserve a better candidate than a Liberal reject, from Brampton.

Whoa there, Charles! Grab some couth!
Reminds me of this, except that since here its an ex-Lib rather than an ex-Tory, I find it easier to see the humorous aspect.

Posted by bigcitylib at 5:20 AM

Go figure. Its a new day.

Let's hope life in Ottawa doesn't ruin her figure like it did to Ruby.

She's hot and might stand a chance against Albina if she can charm the people. She is brown and Chrstian, can tap into the conservative vote base and the large south Asian community base there, but she will lose

Big city, I will vote for her anytime or any party she stands for. Can I send my vote by mail. ;)

Which political party decided they only wanted women to be ordained in certain ridings? Who was it . . .

Why all the fuss? Did the riding association have someone better?

The truth is that Albina will win this riding no matter who runs against her. Even Mayor Hazel would have a problem unseating Albina.

Both the riding association and the PMO are doing a disservice to the other PC candidates in Peel. I say, "keep it up."

Why isn't this under

Mississauga conservatives are in dissary, from an un-ending federal nomination in the South, to seemingly being unable to run a candidate who isn't an ex-Liberal.

The most disturbing part about this story is that the picture that you show is actually the template for the Conservative posters in the next election. Trust me when I say you do NOT want to see Stephen Harper in a midriff-baring little blue number.

You know I'd noticed that Harper has lost some weight. Maybe now we know why.

Hey BCL - I got more on this - you want it - involves Tory dirty tricks -email me your email at bluelemonsatca.inter.net

Didn't work sending to thing you gave me.

The more hotties in public life the better.

Ideology takes a back seat to hotness, any day of the week.

Wasn't it Sheila Copps who came out with the whole "it was an election promise - nobody expects you to keep those"? HA!!

Now do you worried about that in the game do not had enough 2moons dil to play the game, now you can not worried, my friend told me a website, in here you can buy a lot 2moons gold and only spend a little money, do not hesitate, it was really, in here we had much 2moon dil, we can sure that you will get the cheap 2moons gold, quick to come here to buy 2moons dil.

Now do you worried about that in the game do not had enough 9Dragons gold to play the game, now you can not worried, my friend told me a website, in here you can buy a lot 9 Dragons gold and only spend a little money, do not hesitate, it was really, in here we had much 9Dragons money, we can sure that you will get the cheap 9Dragons gold, quick to come here to buy 9 Dragons gold.

Beautiful,you know that mensusa(d0t)com offer big discount on selected items such as Zoot Suits and free shipping in all $99 above.