You're Looking In The Wrong Place 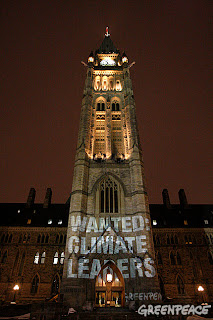 Not a bad little stunt by Greenpeace last night in front of the Parliament buildings. I'm surprised, though, that security didn't come out and roust them off the grounds.
On a happier note, the best news re. fighting AGW these days seems to be coming from the private sector:
“It’s not some sort of peripheral, marginal phenomenon,” he said. “It’s a fundamental economic restructuring driver, in the same way that the railroads were.”
According to Kiernan, most of the investor focus in this realm is on the potential for carbon trading or investing in clean tech companies. He says this is far too narrow a view. “You’re catching about 5% of the opportunity bandwidth as an investor,” he says. “How companies do or don’t deal with these issues is very clearly correlated with their financial performance.”
Somebody in a dark blue suit gets it. But then this is how its supposed to work in a Capitalist society, no? Science brings their case to the Market, and the Market responds. The judgement of Government, slow and stupid as it is, always lags that of the Markets. All hail the Market, and etc.
Meanwhile, a not entirely useless article from the Western Standard on how regulation can stifle green innovation.

Then buy lots of long johns 'cause it's getting cold again.

Read 'em & weep all you Warmongers.

A big kiss if you can explain what you're looking at, anon.

As Hong Kong shivers through its second-longest cold spell since 1885, scientists point to global warming to explain the abnormal cold weather phenomenon worldwide.

Unusually cold weather is gripping a number of countries, including China and Canada.

"We are seeing extremely unusual weather across the world," said polar researcher Rebecca Lee Lok-sze. "This is due to human activities and our style of living. Carbon dioxide emissions are heavy, which is changing the weather rapidly. We could see colder winters and hotter summers in the future in Hong Kong."

Greenpeace echoed the view, saying mainland scientists had also concluded that the extreme cold weather in China was triggered by climate change. "This does not only cause an increase in global warming but also causes extreme weather patterns," said campaigner Edward Chan.

Hong Kong yesterday recorded its second- longest cold spell - 21 days. The longest cold period - when temperatures fall below 12 degrees Celsius - lasted 27 days in 1968. This record is expected to remain intact as the thermometer is forecast to register a low of 13 degrees by Sunday.

Hong Kong has also experienced more than 456 hours of cold weather this winter - more than double the 205-hour record in January 2004.

"Meanwhile, a not entirely useless article from the Western Standard on how regulation can stifle green innovation"

I love it when Lib weapons of mass destruction such as apathy come back to bite them in the ass.

Cry me a river about fair use and filesharing, "Jordan" and "Meagan", I'll gladly pay for content if it means cutting you off from the torpor-inducing Hollywood\Top40 crap that brainwashes you. That goes for you gentrified genital flopping boomers too.

My Expressvu contract is up March 28, Woohoo!

I guess I'd have to the read the thing at The Western Standard to figure out of what the hell William G. Biff is on about.

"Opportunity bandwidth"...What a silly expression. Even if it's well-intentioned, it's just the kind of language that stuns investors into handing over their savings for any ponzi scheme that comes along.

Stuck on Stupid. Hard to see the light when all you can see around you is your lower intestine.

Of all the GHG, why was CO2 the primary focus? Why not water vapour? What were historical water vapour levels? How do you develop them from historical records?

Why are tree growth rings used as temperature proxies? Aren't those trees only from selected areas in the Northern hemisphere? Why was temperature deemed to be the only factor in tree ring growth, and not CO2 levels, water vapour levels, sunlight levels, soil condition, disease, vegetation density, etc. Can you tell maximum or minimum temperature from a tree growth ring?

The number of unanswered questions is staggering. The questions that are as yet unknown are even greater. This is for historical interpretation. For climate prediction, our understanding of global climate dynamics is entirely inadequate, as are the models which attempt to replicate and predict future patterns.

In short, you're simply stooges for a money-sucking socialist plot.

Of all the GHG, why was CO2 the primary focus? Why not water vapour?

CO2 is important since we are the source of all the recent rise. In addition CO2 has a very long residency time in the atmosphere (measured in hundreds of years). Water vapour (while it is a more important GHG than CO2) is a fairly transient atmospheric component with a residency time measured in days.

Why are tree growth rings used as temperature proxies?

Trees provide a good indication of climate based on a response to many things. The trick is to find trees where, for the most part, things are stable. Consider that the average life of a tree is about 100 years or less and we want tree rings that go back 2000 years or more. No one ever said tree rings were easy.

Do you have a reference for this statement. I really hope it is from Jaworowski’s work.

And yet, you warmongers are so certain of it, that you would commit trillions of dollars to it.

I am not certain of your prediction that adhering to some emission limit would cause harm to our economy. I have never seen an economic analysis that takes a real look at the cost benefit analysis or does not just exclude benefits from the equation.

In short, you're simply stooges for a money-sucking socialist plot.

Yes, I can see how that would logically follow! /sarcasm On the other hand, you seem to have opinions that you can’t support and make assertions that you can’t backup. May I suggest that you could probably develop a better argument if you could suppress your obvious emotional entanglement with the issue.

So, which of you has done what on your own account to 'save the planet'? Have you bought a $30,000 hybrid and sent your used car worth $15,000 to the shredder so that nobody else could use it to destroy the planet? Have you downsized and superinsulated your house? Have you set up solar panels for electricity and hot water? Have you stopped driving - period?

Like I thought - none of you have done a thing. All talk, no action. The definition of 'liberal'.

I'm really starting to pity anony. As pathetic as his post asking and answering his own question is, I'll respond.
Nonny, if you hadn't noticed, many people do drive hybrids, never mind all those that choose to use transit, or bikes and don't own cars at all.
I know many people who make conscious decisions about what and how much they consume. You may find it inconceivable, but that's probably because you're an dimwitted, immoral cretin.

Lenny, very, very few. And that's their own choice, isn't it. What you want in your totalitarian little world is to MAKE everybody do as you SAY. Show me the receipts for all the carbon credits you purchased in order to take that winter vacation, or to offset the fact that your stereo had to be transported from Taiwan, or your fruit from Mexico. Give me a break. And you think the pathetic little actions of a tiny portion of the planet is going to save the planet from imminent doom? Whatever. There's no point in arguing with you ecotards as you have no grounding in science. How many papers in climate science has Fruity published? Or Al Gore?

"Trees provide a good indication of climate based on a response to many things. The trick is to find trees where, for the most part, things are stable. Consider that the average life of a tree is about 100 years or less and we want tree rings that go back 2000 years or more. No one ever said tree rings were easy."

As weak as your responses are, I'll just look at one of them for brevity. You've said nothing, except 'tree rings are hard'. What are the factors affecting tree ring growth? CO2 levels, soil condition, local fertilization rates, impacts of other transitory vegetation, water availability, heat levels, insect stress, disease stress, foraging animal stress, elevation, sunlight, winds, temperature, etc. BUT somebody decided that ONLY temperature would be the most important factor in tree ring growth, for all trees, over all the locations sampled. But yet those locations sampled are not global, only regional. Yet you use them as if they were a 'global thermometer'. It's this kind of weak evidence which throws so much doubt into it. The science isn't settled; it's in it's infancy.

Also, you don't understand the difference between a cost to an economy and an economic benefit, which generates wealth. Forcing people to spend money on fighting global warming is a COST.

anony,
Your dishonesty is breathtaking.

What you want in your little totalitarian world is the force to consequences of your actions on me. You want the rest of the world to pay for your lifestyle, but I'm guessing your quasi-socialist ideals don't extend much beyond that.

"And you think the pathetic little actions of a tiny portion of the planet is going to save the planet from imminent doom? "

That's funny, I don't recall saying that, let alone believing it. Would you like to tell me what dimwitted logic led you to that conclusion?
I certainly don't think that my friends and I alone will "save the world", but I do believe in the concept of personal responsibility, something that's likely alien to an immoral cretin. I don't dump paint in the ocean either, but that doesn't lead me to believe that I've prevented the ocean from being polluted.

I'll happily provide you with any reciepts you want. Just provide your name and address. I assume you're weren't lying when you asked for reciepts, were you?

Anonymous @ 5:06: Yes, tree tings are hard to analyze and all the things that you mention are important. But that is what makes the science interesting. A couple of quick comments and then was can expand on the areas you wish to pursue (and I notice you ignored my other comments).

First, while there are many factors controlling growth there is generally one limiting one. In areas if low water, it is water stress. If you are interested in temperatures you generally choose trees near the tree-line since these are most sensitive to temperature. In addition, there are many different measurements that can be taken in a tree-ring. Experience has shown that maximum latewood density corresponds best with summer temperature.

In regards to regional vs global, I have never come across anyone saying data from a tree represents the globe. Instead the usual methodology is to use several trees from appropriate stands in several locations to create a network.

Next up regional curve standardization.